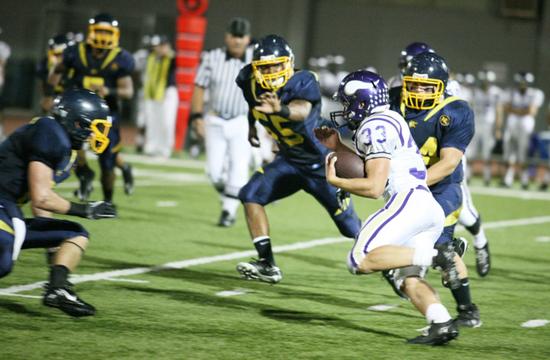 For the second year in a row, Valencia football lived up to its ranking and lit up the the scoreboard against Santa Monica in a lopsided 63-28 victory at Corsair Field Friday night.

Samohi sophomore QB Rhys Gervais’ first-ever start was rough, as Valencia (4-0) scored twice in the game’s opening minutes and went up 14-0. Gervais managed to answer, connecting with receiver Brandon Taylor on a short pass that Taylor turned into a 50-yard touchdown. Samohi’s running back Kori Garcia’s touchdown early in the second quarter tied the game 14-14.

The rest of the game was a different story.

“We did good defending the run and doing everything we can to stop [Valencia running back Steven] Manfro in the first quarter,” Garcia, “but we just came out flat in the second quarter. We gave it our all, it was just a tough a loss.”

Gervais’ four interceptions were also the reason that the game began to slip away in the second quarter. Manfro scored the first of his four touchdowns on the night on a Nine-yard run that put his Vikings up 28-14. Valencia took a 35-21 lead into the locker room at halftime.

“Manfro, he’s a great running back, he runs hard,” Garcia said. “We just got to play 48 minutes in the next game.”

Although Manfro’s touchdown gave Valencia its only points in the third, the No. 2-ranked Vikings scored three more touchdowns in the fourth before Samohi (2-2) wide receiver Kris Comas finally got into the end zone with one minute left in the game.

Samohi head coach Travis Clark indicated he was pleased with Gervais’ performance, despite the four interceptions.

“He’s young, it’s his first varsity start against a great team like Valencia,” the senior said. “I can’t blame him.”

Samohi played into Valencia’s strength by not controlling the ball, something that Clark stressed over the past week in practice and indicated would be a key to this game.

“We gave the ball up on the five-yard line, and next thing you know we throw an interception here in our end zone,” he said. “We gave them opportunities.”

Samohi’s next game will be at 7 p.m. Friday at home against Compton Centennial.