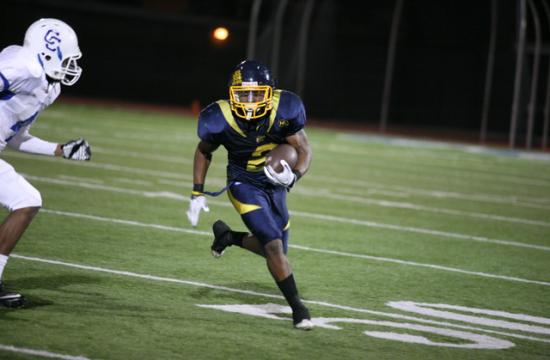 Behind senior running back Brandon Taylor’s key play after key play in the second half, Santa Monica High School kept its playoff hopes alive with a victory over second-place Culver City on Friday night at Corsair Field, 34-10.

With the win, the Vikings move to 5-4 (2-2 Ocean League) and will make the playoffs with a win over Hawthorne Nov. 12 at Corsair Field. On this night, although it was Brandon Taylor’s moment, he quickly put the spotlight on his teammates after the final tick of the clock.

“Tonight you saw what Brandon Taylor is capable of doing,” Clark said.

Tied 10-10 at the half, the Vikings scored unanswered 24 points in the last two quarters, their defense shutting down Culver City in the air and on the ground. Towards the end of the third, Taylor converted on a fourth down, which put the ball on the Culver City 19-yard line. Gervais then lobbed a pass to wide receiver Kris Comas for a go-ahead touchdown.

Up 17-10, the Vikings defense shut down Culver City’s next series, with cornerback Dylan Muscat not allowing the Centaurs (5-4; 2-2 Ocean League) wide receivers to get open.

The Vikings’ tenacity even impressed the coach on the losing side of the ball.

“Santa Monica came to play,” Culver City’s head coach Jahmal Wright said. “They pretty much shut our offense down. I am so impressed with Taylor, Comas and Garcia. They are talents in our league. They did an excellent job. They’re just as good as anybody we’ve played.”

After kicker Juan Pavon’s field goal to put them up 20-10, the Vikings didn’t look back. Taylor had a big carry that put the ball on Culver City’s 7-yard line with less than 5 minutes left and found the end zone with 50 seconds on the clock to put the Vikings up 34-10 for good.

With their playoff hopes alive and well, the Vikings will look to beat Hawthorne on Nov. 12.

“We’re going to bring this into the playoffs,” Taylor said.