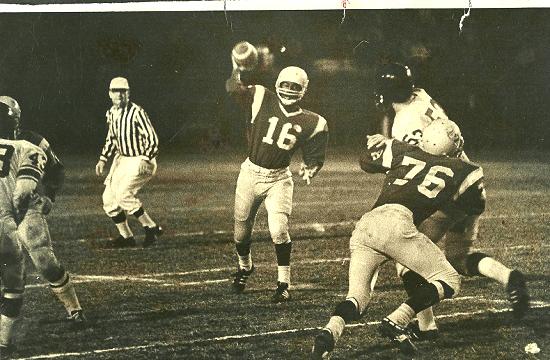 Derry Smith never talked about race issues because he was too busy being a natural leader who just happened to be the first African-American to start at quarterback at Santa Monica High School in the late 1960s.

Smith passed away Oct. 30 at his home in Culver City from complications from kidney disease that he battled for years. He was 58 and is survived by sons Dylen and Derry and sister Rosa Jones.

“All the times I talked to him, he never up brought up race,” said his older son Derry, 35. “He might have mentioned, ‘don’t let them change your positions,” but then, he [would joke] he was too slow to play any other position.”

Smith and his wife grew up in Santa Monica, the offspring of grandparents who came from Alabama.

“All of my cousins and uncles grew up here and went to Santa Monica schools,” the younger Derry said. “Almost all the males played football.”

The elder Derry played football and baseball at Samohi and even had a chance to travel to the Pan-American Games in 1969-70 in Italy “to try and get [baseball] introduced into the Olympics,” the younger Derry said.

“He loved the city of Santa Monica,” in part because “there was a stronger Black community” but also because “it was ethnically diverse,” the younger Derry said.

The elder Derry attended Edison Elementary and John Adams Middle School. As a Samohi senior in 1969, he led the Vikings to a 9-0 record and was named second-team All-CIF. Current University of Southern California athletic director Pat Haden was first and it was something that didn’t sit too well with the elder Derry, an intense competitor. Later in life he became a Haden fan, however.

“He kind of had a little rivalry with Pat Haden,” the younger Derry said. “Haden was all-CIF and my dad was second. [It was a] little thing there, but then he followed his career.”

The elder Derry looked up to Jim Plunkett, and wore the No. 16 jersey to pay homage. He also loved watching O.J. Simpson and Mike Garrett play for the Trojans.

Derry’s younger son Dylen Smith, 31, attended Samohi and played quarterback at Santa Monica College during the1998-99 season, when his teammates were future NFL wide receivers Chad Ochocinco – then just Chad Johnson – and Steve Smith. Dylen went on to play at the University of Kansas.

The elder Derry was also active in Santa Monica Boys and Girls Club, Little League, and youth football in Venice.

Even with all the athletic accolades, it’s the simple things that the younger Derry remembers about his dad.

“I lived with my mom but I guess some of my memories were me and my dad got a lot closer as I got into my high school and college years,” he said. “The memory I have is of him just wanting to hang out, go see some music, have a beer, that kind of thing. He was one of those bonding moments. He was my friend and my dad.”