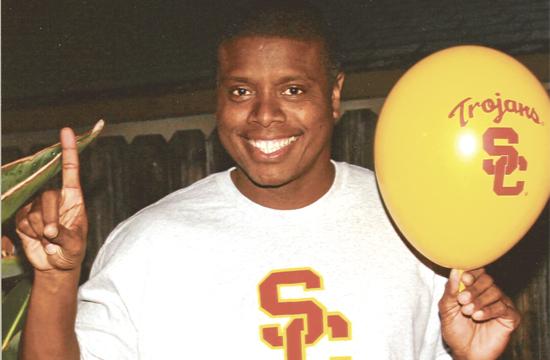 Entrepreneur Greg Kusch has a story to tell about his childhood friend Antonio “Tony” Todd, a Santa Monica High School alumnus and one-time USC football recruit. Todd, an actor by profession, last year invited Kusch to a Major League Baseball spring training event where the two joined Atlanta Braves first baseman Derrek Lee and boxing legend Muhammad Ali for dinner. Near them at the bar was famed baseball manager Dusty Baker, who walked by and acknowledged the group. Baker asked if they knew they were blessed, and each person said yes and then they prayed. When it came Todd’s turn to speak, Kusch recalls, he told Baker, “I’m going to tell you the facts. I didn’t pray too much but one year ago we were here and my friend Kusch, when we got back to L.A., was diagnosed with cancer. Since then I’ve prayed every single night.”

For Samohi, having Todd around is a prayer answered in more ways than one, given budget cuts across the school district this year and in the foreseeable future.

“Tony is very unselfish and generous with his time,” said Fernando Cornejo, who was Todd’s teammate on the Samohi football team.

A mainstay on the sidelines at home football games, Todd is in his second year as organizer of a celebrity poker tournament to benefit Samohi baseball. Last year, the event netted more than $30,000. The well-connected former athlete managed to secure a $2,500 contribution from Derrek Lee, a Sacramento native who had no prior relationship with Samohi. The All-Star player also donated a signed ball and jersey.

Although Todd is technically an athletics booster, the phrase is seldom used by those who know him. In these tough economic times, he’s stepping up to make sure that Samohi baseball players have the necessary equipment to compete and go on to college careers.

“What we’re trying to do is to make sure that the parents don’t have to put up more money,” Todd said.

“I just hope the kids appreciate what [Samohi baseball coach] Sheldon Philip-Guide and I are doing for them. I do it because people helped me along the way.”

It’s not like Todd has to do any of it, although good publicity never hurts in Hollywood. Todd has a successful acting career, with credits in films such as “Higher Learning” and television shows such as as “Rules of Engagement.”

Before pursuing acting, Todd was on fast-track to becoming a professional athlete – but that dream was shattered in the second football game of his senior season in 1982.

“It was hard for me to go to games, because I broke my ankle in a second game of the season and it was taken away from me,” he said. “I ended up going to a junior college and ended up playing baseball at the University of New Mexico.”

It’s not just the ‘who-you-know’ mantra with Todd, Derrek Lee emphasize in an email the Mirror.

“Tony has always supported me with my charity events, and he is always looking to help someone,” Lee said. “When he told me he was raising money for the school, I just wanted to help out. Tony is the type of guy who knows everyone and they all love him. Just a great, positive, happy guy.”