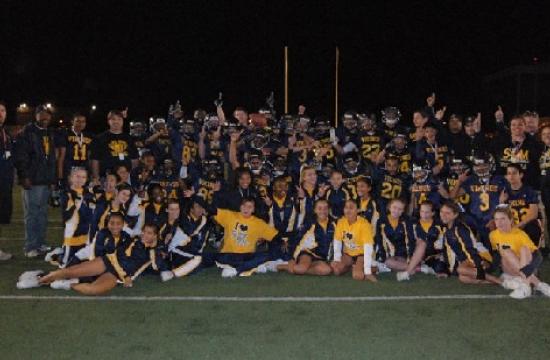 A Santa Monica Vikings youth football team has a perfect 10-0 record and will be playing for a national championship in Orlando, Fla., the first week of December.

The midget division squad coached by Aaron Buckner dropped Lawndale 32-0 on Nov. 20 and will depart for Florida in a few weeks – where its win or go home.

“We are going in as a wild card, because we are not playing in a district qualifier,” Buckner said. “It all comes down to that first game, we’ll continue on, if we lose, we don’t know what we’re looking at.”

The Vikings, whose 33 players are 13 to 14 years old, have been virtually unstoppable, giving up only one touchdown during the entire season as their team pursuit-oriented defense thoroughly dominated opponents in the Pacific Coast Conference.

“They’ve just been playing lights-out football,” Buckner said. “We have a unique situation this year. We have been able to gather quite a bit of talent and it’s a bit more than you’ll find on most football teams. They understand this year what it takes to be a championship-caliber football team.”

“This year more so than I’ve seen at the youth level, the amount of high school coaching staffs that are interested in the group of boys we have on this football team,” Buckner said. “We’ve had coaches from big time high school football programs in southern California watch the kids play and practice.”

Justin Nelson, one of “six or seven” team members who attend Lincoln Middle School, plays on the offensive line and left tackle on defense. The team’s recipe for success, he said, has simply been working hard. “a lot of hard work. You had to bring it every day.”