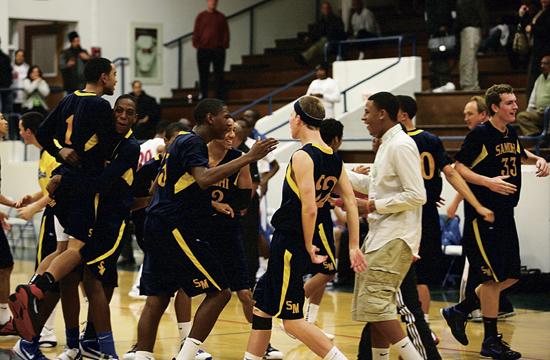 Santa Monica High School boys basketball team went from down 0-8 in the first quarter, and letting the game slip away, to winning a thriller against the defending CIF Division 3-A Serra of Gardena on Tuesday night at Samohi’s South Gym. The final score was 56-54.

The Vikings also played Sheldon (Sacramento) in the second round of The Tournament on Thursday, Dec. 9, which is after this issue had gone to the presses. Check smmirror.com for the game report.

In the Serra contest, the Vikings were led by sophomore guard Jordan Matthews, who scored 21 points, but also had a number of players, especially senior Holden Foshag, step up. Matthews played down the upset after the game and keyed in on the word “hard” to describe how his team beat the defending state champion.

“It’s not an upset, man, it’s just a win,” the 6-foot-3 guard, whose dad is UCLA assistant coach Phil Matthews, said. “We played hard. We just went through a tough tournament where we had issues playing hard, came out tonight and we battled. It feels good, really good. We played hard, really hard.”

Matthews had major help in senior guard Foshag, as the duo combined for 32 points, including 11 points from Foshag. The duo’s play sparked a Viking comeback in the second quarter with back-to-back plays on offense and defense that slowed down a more athletic Serra team, paced by 6-foot-7 senior forward/center Ronnie Stevens, who will play for the University of Hawaii next season.

Samohi head coach James Hecht was pleased with the victory and the Matthews-Foshag tandem.

“When we put one on one side and one on the other, it allows us to spread the floor and we try to take advantage of that,” Hecht said. “Serra was doubling a lot on the first pass, which opened up our shooters in the corner for us, and we were able to knock down some shots. We’ve got some key rebounds in the second half, especially the end of the last few minutes of the fourth quarter, and were fortunate enough to walk away with the victory.”