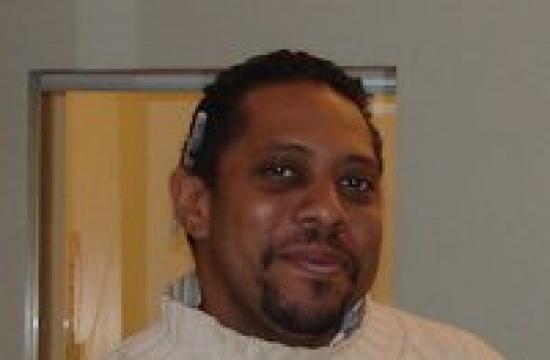 Attending funerals in South Los Angeles on Saturday mornings is not my kind of party. I’d rather be at a basketball game watching a reverse dunk. But, because there are exceptions to everything – and there are exceptional people like Keith “Buck” Neal – I had to show up to Southern Missionary Baptist Church on Adams Boulevard. I heard about the funeral for Neal from actor, Santa Monica High School athletics booster and all-around good guy Tony Todd at a high school football game in the Encino the night before. I figured Neal was someone important – just not how important.

Neal was 40 when he passed away from complications from stomach cancer. His parents’ only son, he was more than just a standout hoops player at Santa Monica in the mid-80s who led the team to the CIF championship.

“He was a winner on the basketball court, but also a winner in life,” his pastor summed it up early in the service. ”He was a champion.”

The pastor was but one of many people who stepped up to the podium to eulogize the man most knew as “Buck” or “Young Buck.” He earned that nickname because he had deer-like instincts when playing basketball. He would “get a rebound and go back up like a pogo stick,” according to one speaker.

More than a dozen people spoke at Neal’s service, thus it was nearly impossible to get everyone’s name. But the big picture that emerged is that he did a lot of great work in the Santa Monica community, where was raised and schooled. Neal was born June 7, 1970 and attended John Adams Middle School, then Samohi, where he is believed to be the first player to play varsity basketball all four years, including that CIF championship run as a junior in 1987. Neal went on to earn a bachelor’s in sociology from Cal State Dominguez Hills and returned to Santa Monica to work at the parks, first at Virginia Park and then at Memorial Park.

Neal, survived by his parents, three sisters, two nieces, two nephews and two great nieces, loved playing ping-pong and listened to reggae and classic hip-hop. Although the lore of his high school hoops performances lingers – his coach mentioned that Crenshaw High School players who played against Neal remember the three dunks, including a reverse, that he flexed on them in a game – there is another dimension that drew respect from members of the community. Neal, typically a “witness to many community tragedies,” one speaker said, was known for diffusing tough neighborhood situations as well.

On an otherwise sad day, as I walked out of the church to avoid the pastor lengthy sermon and right into Santa Monica-Malibu school board member Oscar de la Torre – standing on the street corner – I heard the one analogy that put it all in perspective on Keith “Buck” Neal’s life.

“That’s what Keith did – he reverse dunked life,” a speaker, middle-aged man dressed in a black suit, said.