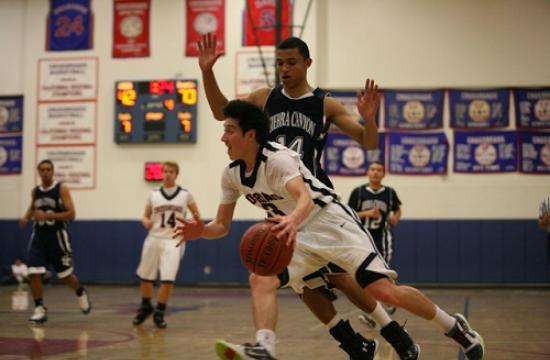 Top-ranked Sierra Canyon’s athleticism, play-making and hustle proved too much for Crossroads boys basketball team Tuesday night at Grisanti Gym, as the Roadrunners were routed 46-70.

Sierra Canyon had four players in double figures to Roadrunners’ one: Luke Shmuger with 26. Forward Gysi Williams had an off night for Crossroads, scoring just one point in the contest. The Roadrunners couldn’t match Sierra Canyon’s presence inside, leading to fouls and made free throws for the team from north Los Angeles County ranked first in CIF’s Division 5 (The Roadrunners are ranked third in CIF Division 5-AA).

“We’ve played teams as tough,” Shmuger said after the game. “I know we definitely can play with them. We just need to prove it to everybody.”

Crossroads was within 3 points of Sierra Canyon with just under six minutes before the half but Sierra Canyon capitalized on offensive boards, hit its free throws and opened up a 18-point lead at the half-way mark, 20-38.

In the second half, with Williams unable to sink a mid-range jumper and dominant play from Sierra Canyon’s Bryan Alberts, the defeat turned into a route.