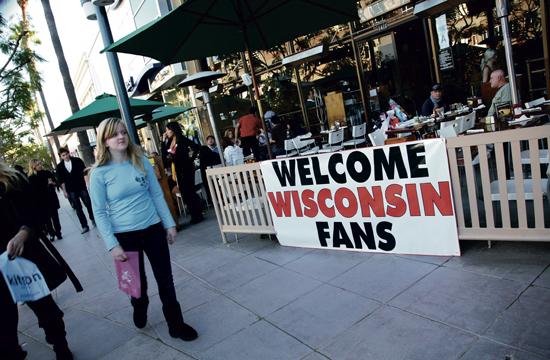 One way that Kim Baker, Santa Monica Convention and Visitors Bureau’s director of marketing, is gauging whether hotels are at full occupancy at this time of year is if they decline to participate in an online marketing campaign.

And at the rate of decline, things are looking up, apparently. With the Rose Bowl crowd in town this week, “only a few hotels wanted to participate [and] that’s definitely a good sign,” Baker said.

Exactly how many people will pass through Santa Monica during these holidays and how much money hospitality and retail will generate for the city’s coffers remains to be seen. However, based on last year’s turn-out and the the planned pep rallies for the droves in town to support Wisconsin and Texas Christian University, stores like United Colors of Benetton on Third Street Promenade are meeting their sales goals. In fact, this year’s sales on Christmas matched last year’s at Benetton, which was one of seven stores open on the Promenade, said sales associate Vivian Shin.

Benetton is one of a number of stores that are benefiting from the Bureau’s “welcome strategy,” as Baker puts it. In addition to placards posted on the storefronts that feature TCU and Wisconsin logos, there is the iPhone app that allows its users to see special offers from some 40 local businesses, Baker said.

There weren’t many Wisconsin or TCU fans on Third Street Promenade on Monday, but Jeannette Perez, Benetton store manager, said she noticed tourists who were stuck in southern California due to travel conditions back east often walked in.

“Majority are people who are stuck here, who are heading home … trying to fly out to Paris [among other cities],” she said.

The pep rally for Wisconsin fans, scheduled for Dec. 30 at Santa Monica Place, promises to be a draw as former Badger running back Ron Dayne, who won the Heisman Trophy and briefly played for the NFL’s New York Giants, was scheduled to make an appearance to sign memorabilia. It wasn’t known whether the TCU Horned Frogs would have a pep rally.

Last year, fans of the University of Oregon had a pep rally on Dec. 30, while the Ohio State University contingent rallied on Dec. 31.

“Wisconsin is traveling to California in droves,” Baker said, anticipating the crowd may swell to the reported 25,000-plus that came out in support of Ohio State last year. The Wisconsin alumni groups are “expecting [the crowd] as big as Ohio State last year,” she said.