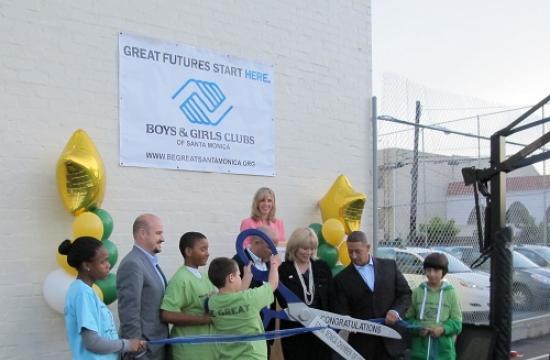 When the Boys and Girls Club of Santa Monica shuttered its skate park, upsetting more than a few skaters’ parents, the Club’s top executive Aaron Young was nothing short of Public Enemy No. 1. Three months later and $40,000 of Lebron James Family Foundation money later and some of those parents have called him to apologize.

Exactly how did Young and the Club, which has an annual operating budget of about $3.5 million and serves hundreds of kids, apply and get funded the money to build seven outdoor basketball courts on the same concrete space where the skate park once stood?

“Perfect timing,” Young said on a rainy Friday, standing just beside the courts, which bear the Lebron James Family Foundation logo and were unveiled in a ribbon-cutting ceremony on Dec. 16.

It’s about way more than basketball, however, as the courts will used for a lot more than just the sport in which Lebron is simply known as ‘The King.’ Not only will the space be used for various sports, from baseball to surface hockey, but the James Family Founation’s million – a sliver of the purported $3 million in advertising revenue surrounding Lebron’s infamous ESPN-aired ‘Decision’ to leave Cleveland for South Beach – come with “16 HP computers and approximately $4,000 in Nike product,” Young said. The items are on their way, Young added.

The decision to close the skate park came out of a need to use the space to be able to serve more kids, because the club gets up to 700 children coming through its doors on peak days. There are more than 30 basketball teams that practice and play in the club, with about 200 kids on them combined.

The way the hoops courts came about is a story of destroying and rebuilding, apparently. And luck. About two weeks after that unpopular decision was made, drawing the ire of dozens of parents, Young and his team applied for the James foundation funds. Several weeks after that, they had an affirmative answer from the Boys and Girls Club national office – the Club was James’ primary targeted nonprofit to benefit from the ‘The Decision’ – and construction began. The most expensive items were the “fully adjustable, top of the line hoops” and the impact-absorbing pads; it was relatively inexpensive to reseal the asphalt after the ramps were removed, Young said.

While the basketball courts at Santa Monica’s club on Lincoln Boulevard constitute the first project fully funded by the James Family Foundation, they are but one of many to come across the nation. In fact it, it is one of the smallest projects, Young said, as 60 more projects are underway.

The projects will reach somewhere close to a one million children, Young said.