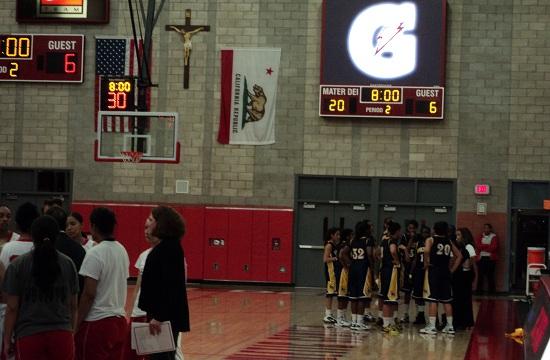 The loss drops Samohi to an 11-3 record on the season as they open Ocean League play at Inglewood on Wednesday. Samohi then hosts Troy (Fullerton), which is ranked No. 2 in Div. 1A, at 6 p.m. on Jan. 17. Samohi then plays at Long Beach Poly on Jan. 22. The Lady Jackrabbits are ranked second in the CIF Southern Section Div. 1AA Top 16 poll as of Jan. 10, while Samohi is ranked No. 6.

Samohi won the tip-off against Mater Dei and scored the first points of the game but Mater Dei’s sharp three-point shooters quickly ran the lead up to 20-6 lead in the first quarter. Rallied by a big block by

Samohi’s UCLA-bound guard Moriah Faulk in the second quarter, the Lady Vikings went on a run that brought the score to within two, 36-38.

That would be as close the game would get for Samohi as Mater Dei’s balanced offensive attack and stifling defense in the third and fourth quarter ensured the Lady Monarchs’ victory.

“I think we had a good loss,” said Samohi forward Imani Holloway. “Now we’ll prepared for next time, now we know how they play.”

Holloway said Mater Dei was comparable to Bolingbrook, another top team the Lady Vikings played earlier in the season, in the Nike Tournament of Champions in Phoenix, Arizona.

“We knew it was going to be tough to come down here and win the game, but our goal first was to make sure we competed at the highest level,” said Samohi head coach Marty Verdugo. “We got behind early, closed the gap a little bit and then came out and got it down to two and then kind of relaxed – and against a team like Mater Dei, you can’t relax.”

Verdugo took away a lot of positives from the game and looks forward to a possible rematch, which is likely to come in the CIF regional playoffs in six weeks.

“What I was happy is, I think we showed character all the way to the end,” Verdugo said. “The team kept trapping, pressing and that’s a big step forward. I think in six weeks we’ll be a different team and will be able to compete with these guys for four quarters.”

Samohi’s Bianka Balthazar chalked up the Mater Dei loss as a lesson learned and was also optimistic going forward.

“It’s a learning game and we see them later on in the season,” Balthazar said.