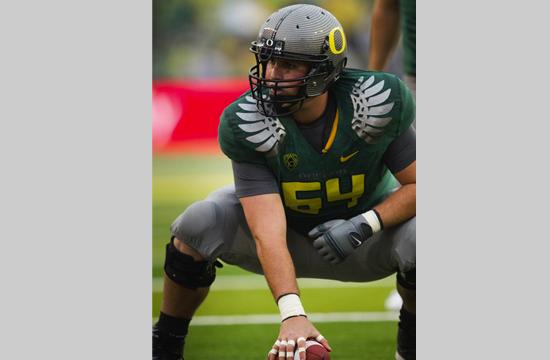 [Editor’s Note: When presented with an opportunity to share Oregon Ducks’ backup center Max Forer’s story with our readers, the Mirror staff decided there was no one to tell the story better than Forer himself. After all, the opportunity to play for a college football national championship is a once-in-a-lifetime experience.]

I started off as a 6-foot-1, 240-pound offensive tackle at Santa Monica High School who was told that he could not play at Division 1 level and that Division 2 or 3 was more in the range of my abilities. But, I got a chance to become an invited walk-on by Oregon Ducks Assistant Coach John Neal, which meant I was more then a guy who just went to school and thought it would be a good idea to play football. I was recruited and accepted by the coaching staff before I even got to Oregon.

During the summer before I joined Oregon, I knew I had to change my body and approached Kermit Cannon, a youth physical training specialist who works with the Santa Monica-Malibu Education Foundation, to help with my goal. I worked with him throughout the summer and without him I wouldn’t have been at the level I am now. I was looking up at the guys like NFL players Max Unger and Geoff Schwartz, among other massive human beings, who were all at least 6-foot-5 and more than 300 pounds.

I grew up with Cannon’s help and became a 6-foot-3, 280-pound athlete. I was told to play center, a position I’ve never played before but was one I had to master to stay on the football team. It took three years of different guys trying to beat me out for a spot on the team, but I finally got a spot on the travel roster and became the backup center.

My junior season went by quick and before I knew it, we beat Oregon State and headed to play in the Rose Bowl – a dream of mine as a kid since I went to UCLA games many times over the years. My father Jeffrey Forer played at UCLA.

During the third quarter of the Rose Bowl game, our center, Jordan Holmes, went down with an injury. I came into the game and the offense went on a scoring drive to help us take the 17-16 lead in the game. In the end, we lost, but to be able to play and succeed was a personal victory for me.

In 2010, my senior year, I played in seven of 12 games. We went undefeated and were selected to play for the national championship against Auburn. We were called the blur offense and the way we practiced helped lead us to win games. Our habits, discipline, and structure created a team with synergy as cohesive as glue. Against Auburn, we played our hearts out and lost on a last second field goal. We were crushed. While we lost on the field, I have proved doubters wrong and believe I paved a path for all future dreamers to try to live their dream of playing anywhere in the country.

My story is one of perseverance and of hard work and dedication. I believe you can do whatever you put your mind to do. I want my story to inspire and help dreamers like myself make their dreams reality. Sometimes you just have to go for it.