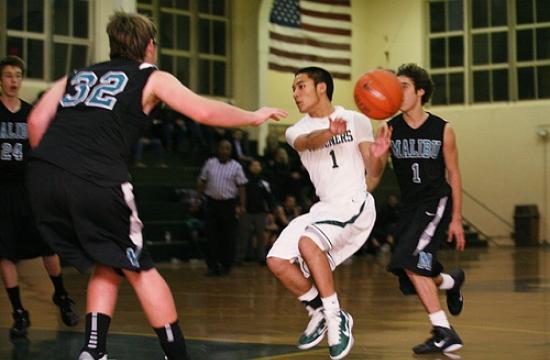 St. Monica boys basketball took care of business at home Monday night with a 43-35 victory over the Malibu High Sharks.

“It was an ugly win but a win is a win,” said Mariners head coach Khi-Min Jung, whose team was up 15-10 at halftime behind lackluster 14 percent field goal shooting. “We couldn’t throw the ball in the ocean.”

In the second half, Mariners defense picked up behind the defensive hustle of Nick Chaidez, who also netted 10 points on the night.

“He struggled from the field but he is one of our best shooters so we just told him to keep shooting,” Jung said.

Troy Whiteto led the Mariners with 12 points on the night and Brandon Hualde also had 10 points.

The Mariners will open Camino Real League play Wednesday, Jan. 12 against Mary Star of the Seas. First, however, they play Brentwood at 7 p.m. tonight (Jan. 5). Brentwood dispatched Viewpoint in its last game and is the top-ranked in its CIF division, Jung said.

“They have a good point guard and a good post player,” he said. “It should be a good game tomorrow night.”