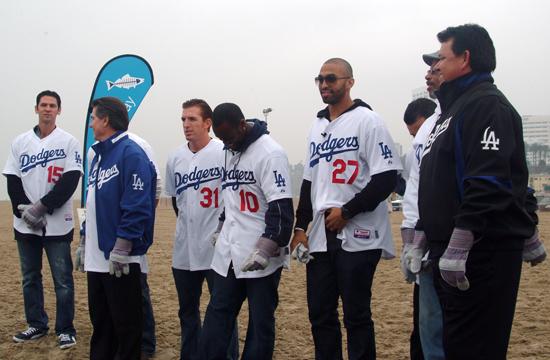 Rain can often cancel baseball games, but it seems it isn’t enough to cancel a beach cleanup with the Los Angeles Dodgers in Santa Monica on Feb. 15.

Nearly 300 fans braved the drizzle to clean the beach and mingle with current and past Dodgers greats, including Matt Kemp, Fernando Valenzuela, and Steve Garvey.

Dodgers split into groups, with pairs leading groups of fans up and down the beach to pick up trash. The teams competed for most trashed collected. Outfielder Gabe Kapler’s team slowly and methodically trailed behind the other teams but collected 30 pounds of discarded and washed-ashore refuse to win the battle.

Heal the Bay organized the event in conjunction with the Dodgers’ annual Community Caravan. Volunteers collected more than 75 pounds of trash in less than an hour. Heal the Bay hosts monthly volunteer cleanups for the general public.