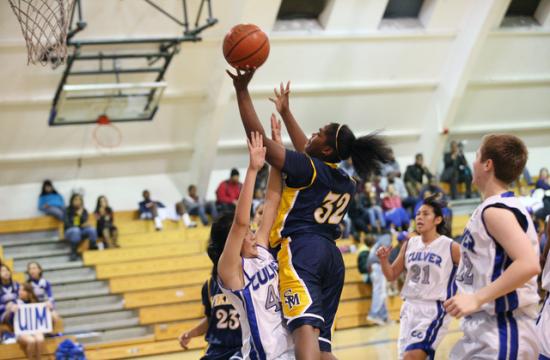 CULVER CITY – With a 53-30 drubbing of Culver City on the road Feb. 2, Santa Monica High School girls basketball team exacted revenge on the Centaurs, who beat them at home earlier in the season, and are looking to finish higher in the Ocean League with two games remaining.

At Culver City, Samohi led 29-13 at halftime and didn’t look back in the second half, cruising to a comfortable victory behind 16 points from Moriah Faulk, 10 points from Kalaria Obasi and 8 apiece from Bianka Balthazar and Briana Harris.

“We came with a little chip on our shoulder,” said Samohi head coach Marty Verdugo. With the backdrop of consecutive losses to Inglewood and La Jolla Country Day, he stressed defense during practice – and the girls apparently took heed. The prior weekend, the Lady Vikings went 0-2, losing 58-61 in overtime to Inglewood on Jan. 28, then falling to La Jolla Country Day 64-51 on Jan. 29.

In the physical contest against Country Day (19-3) and its twin stars Malina and Maya Hood, Samohi (16-8; 5-2) got off to a slow start and trailed 38-17 at halftime before turning it up in the third as Moriah Faulk found her rhythm. The Lady Vikings closed the lead to 8 points, 44-52, with just under 5 minutes left in the game. But the Hood twins overpowered Samohi’s defense inside and wouldn’t let Samohi get second chances on offense.

“After a slow start, we battled back but couldn’t get over the hump,” Verdugo said.

In the game, Faulk led the team with 15 points, while Kristina Johnson scored 11 and Bianka Balthazar and Briana Harris had 8 apiece. For Country Day, Kelsey Plum poured in 23 points while the Hood twins combined for 33 points.