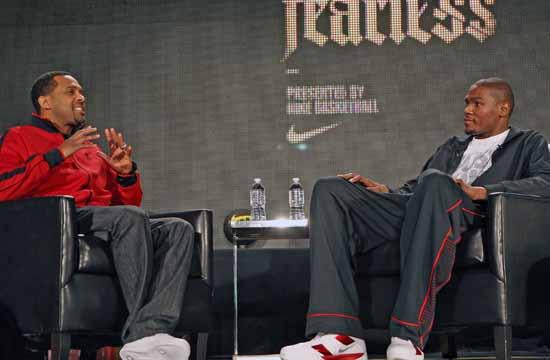 Nike, one of the premier sports endorser presented one of Nike’s “Los Fearless” top athletes to Oklahoma City Thunder star forward, Kevin Durant. After receiving the second most votes in the Western Conference and was named a starter on the 2011 Western Conference All-Star Team, Kevin Durant is in town for the NBA All Star Weekend to take a look at the new Nike Zoom KD III that he will be wearing at the NBA All-Star Game at Staples Center, Los Angeles.

The event which was hosted by comedian, Mike Epps added some of his humor and frolics to the crowd, making it more fun as KD talked about his new shoes.

Durant mentioned that he owe a lot of his success in his career to his coach and childhood mentor Charles Craig, and continues to wear #35 in honor of “Big Chucky” who was murdered at age 35. According to him, Coach Craig taught him the fundamentals, discipline, teamwork and, “If you dream, make sure you dream big”, he emphasized.

Wanda Pratt, KD’s mom talked about how his son started to play basketball at age 7 and went his way up at 11 years old when he won the MVP of the team.

Focusing on lightweight stability and a forefoot-friendly design, Leo Chang, the designer, has created a shoe that fits Durant’s life style while adding a number of personal touches to the shoe, like representation of his parents, his love for music, his addiction to video games, his hometown and home city, and his team. The Nike Zoom KD III Men’s Basketball Shoe features a Fly wire body, a web of super-light, super-strong nylon fibers that support the foot by encasing it in a secure hug. Weaved in with the laces, an arch strap provides extra lockdown.

Number 35 is looking at All-Star Game number 2, and you’ll see him wearing the KD 3 of his Nike signature shoe in this sweet West-inspired All-Star Game color way. The Nike Zoom KD III incorporated all the features prescribed by Kevin Durant. The lightning bolts on the outsole in honor of his team, the piano keys at the heel for KD’s love of music, the BF62 insignia where he scored 62 points at Barry Farms near his hometown of Washington D.C.

When asked about the secret to his 62-points signature move, he stood up and without hesitation demonstrated it to a group of teenagers in the audience. There are three steps. First, dribble to the top of the key. Second, stutter step. Third, pull up jump for a shot.

Another Facebook fan also asked, “What do you want to do after your playing days are over?” He said that he’s going back to college at University of Texas to get a degree and hopefully become a coach someday.