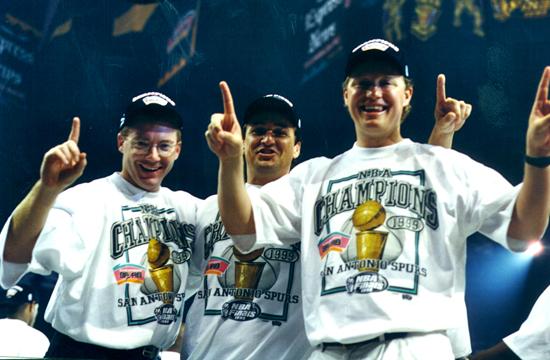 When he’s not coaching Santa Monica High School girls basketball team to CIF championships or teaching U.S. history and government, Marty Verdugo recalls a different kind of history. It still revolves around basketball, albeit at the highest level: the National Basketball Association.

It was Jan.15, 1998. Verdugo and his wife were in the midst of a heart-to-heart about his future, since he stepped away from basketball, experimented with acting, and was asking himself ‘how am I going to get back to basketball?’ The phone rang and he didn’t answer right away – the couple didn’t have caller ID – but when he finally picked up the phone, it was a longtime friend Mike Budenholzer. “We took care of Mike when he was young and needed a place,” Verdugo said.

Budenholzer was calling to see if Verdugo was interested in the video coordinator job with the NBA’s San Antonio Spurs, a franchise that at the time had a young center named Tim Duncan and veteran David Robinson. Although Verdugo’s wife’s high-earning job in the legal department of cable giant Univision prohibited the move, it was an opportunity that was hard to pass up. The team was coming back into play after a lockout-shortened season.

“I didn’t talk to him for almost a year,” Verdugo recalls of his friend. On Jan. 18, three days after the fateful conversation, Verdugo was back in San Antonio.

The story could easily stop there, if it wasn’t for the little fact that the Spurs went on to win the NBA championship that year, dismantling the Patrick Ewing-led New York Knicks in five games. Verdugo worked a grueling schedule 68 days in a row, yet calls it “one of the greatest things that ever happened to me.”

To this day, Budenholzer and Verdugo remain close. Budenholzer will be coming to Los Angeles during next week’s NBA All-Star Weekend and coach the rookies against the sophomores – a position bestowed on him because the Spurs are in first place in the Western Conference.

“It’s definitely not the case of ‘opposites attract,” Budenholzer jokingly said in a phone call. The coach chuckled when told that Verdugo would say the same thing about him and quickly pointed out that Verdugo has contagious passion and energy. It wasn’t just that “he was a good fit” for the Spurs job when it became open, but “Marty knows the game,” he said.

After relocating to Southern California, Verdugo earned a degree at Cal State Dominguez Hills and went on to work as an assistant coach for James Hecht on the boys side of the Samohi varsity program before taking over as girls varsity head coach.

Having put in work in basketball camps in the Bay, Verdugo was always prepared for “when someone was going to make that call” that may change his life. He shares what he’s learned with Budenholzer with the Samohi girls team. For instance, when the Spurs play the Lakers, he shows the video of former San Antonio guard Sean Elliott hitting that “miracle” of a shot against the Knicks. He also recalls the story of how it was Budenholzer who made the call that ended up forcing the Knicks to put the ball in then-forward Latrell Sprewell’s hands to end the game in the Spurs’ favor. Budenholzer, who was 24 or 25 years old at the time, Verdugo says, turned to Spurs head coach Gregg Popovich and said, “I know what they’re going to run.” The young assistant, “shaking like a leaf,” made the right call, as Sprewell indeed got the ball and not the Knicks’ sharp-shooting forward Allan Houston.

These are just some of the “cool stories” Verdugo shares with his students and student-athletes, which go along with his philosophy that “if you do things right, if you’re ready when the call comes,” success isn’t far behind.

After leading Samohi girls basketball team to a CIF title last season and with three of his starters this year headed to top colleges and universities, including UCLA, Verdugo isn’t quite ready to announce his plans basketball-wise yet, although he did tell the local media he’s stepping down as coach.

Of all the journeys he has been on, one does keep him humble no matter what. In August of 2010, Verdugo and his wife Phyllis traveled to East Africa. On a safari through the countries of Kenya and Tanzania, Verdugo “bought a little bracelet in a Maasai village.” After finding out the locals had “to walk 8 miles a day to bring water back to their village,” there was only one rhetorical question he could throw out, astounding given what he has accomplished in his soon-to-be 50 years.

“What am I complaining about?” he asks.

One father whose daughter Christine plays for Verdugo definitely has no complaints and put it all in perspective after a recent Samohi game.

“It wasn’t just basketball,” Padilla said. “He brought the whole community together.”