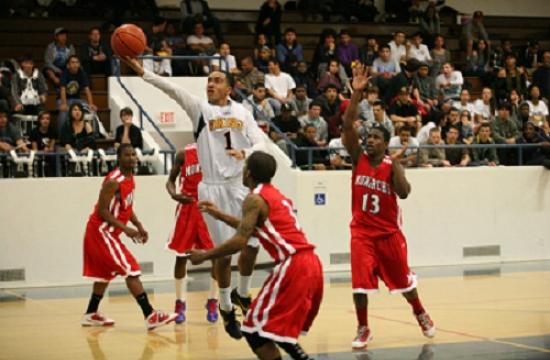 Santa Monica High School boys and girls basketball teams beat their respective Ocean League rival Morningside squads Tuesday night at the North Gym to begin the 2010-11 regular season’s final week. The Lady Vikings set the pace, notching a 72-43 victory over the Lady Monarchs and Vikings followed with a 63-48 win over the Monarchs.

“We came out tonight with the necessary desire to play lock-down defense, which led us to scoring at will in transition,” Lady Vikings head coach Marty Verdugo said. “When we do that, it makes for a long night for our opponent.”

The Lady Vikings were up 66-29 as the third quarter came to a close and although it was evident Morningside didn’t pose a threat, Samohi didn’t relent. Imani Holloway scored on an assisted lay-up during a fast break early in the fourth and starters Kristina Johnson and Moriah Faulk came back into the game briefly before Verdugo cleared the bench.

On the boys side, head coach James Hecht’s Vikings got off to a fast start and ran off with a 63-48 victory. Holden Foshag and Jeremiah Shevlin each hit 3-pointers in the game’s first minutes but Morningside’s athleticism and hustle kept the game close in the first quarter and through the second. The Vikings’ scoring and offensive rebounding helped them to keep the Monarchs at bay.

“We picked it up tremendously,” Foshag said. “It’s win or go home. They beat us at their place so we had to protect our homecourt.”

Samohi was up 49-34 to end the third quarter and a Viking even had the game’s only dunk in the fourth as Foshag played solid defense and Jordan Matthews was aggressive on the offensive boards.

Both Samohi teams host Hawthorne at the North Gym on Thursday, Jan. 10. The girls game tips off at 6 p.m. and the boys’ follows at 7:30 p.m.