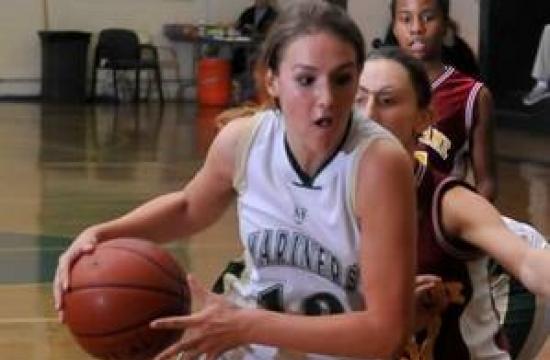 Cory LaGuardia has scored more than 1,200 points in her St. Monica career, passing Alex Pagnato’s mark of 1,158. More importantly, the Lady Mariners are 11-14 overall and possess a 4-2 El Camino league record as they push to make the CIF playoffs.

LaGuardia is averaging 15.6 points per game as the season winds down. LaGuardia, who carries a 4.3 GPA, missed the first four games of the season with a knee injury. The four-year letter winner in basketball and volleyball has helped carry her team and Skinner is giving her her dues.

“Cory is the quintessential student athlete and St. Monica is proud of her accomplishments on and off the court,” he said. “She is a wonderful person and we are blessed to have her be part of our community of students.”

The Lady Mariners have won four games in a row and five of their last six. The No. 9-ranked team in the latest CIF SCIBCA Div. 5AA poll defeated conference foe Mary Star 55-44, in which LaGuardia scored 19 points and pulled down 12 rebounds, Monique Boe poured in 15 points and had 11 rebounds and Shaina Hernandez had 13 points and 6 rebounds.

St. Monica plays Cantwell Sacred Heart Tuesday, Feb. 8, and its final home game will be against LaSalle of Pasadena on Thursday, Feb. 10. Before the game, LaGuardia will be honored for her record-setting performance. Tip-off is 7 p.m.