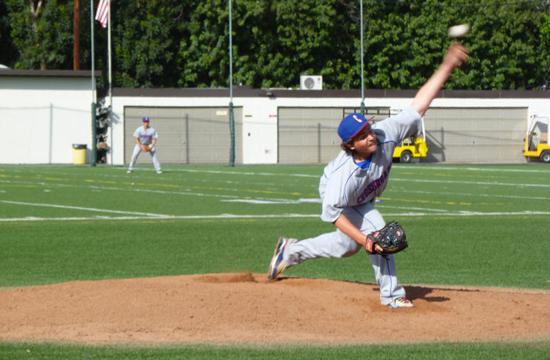 Crossroads freshmen Jack Freedman was given the ball on Friday March 18, and the confidence of his coach, to pitch against the Campbell Hall Vikings, who are arguably one strongest teams in the Alpha League.

Although Crossroads lost 10-6, Freedman pitched well except for a five run fourth inning. Though it’s unusual to see a freshman start a varsity game, Freedman made the best of the experience battling in every inning even though he didn’t always have his best stuff or control. The lefthander had trouble finding the plate at times, walking two in the first and three in the third, while striking out four.

Up until the fourth inning, he had managed to keep the Roadrunners in the game trailing just 4-to-1. It started out well by striking out the leadoff batter, but then a bloop single, a run scoring triple, followed by a two RBI doubles and two more runs on a home run, and the Vikings had scored five runs. His coach, Spencer Kirksey, elected not to take him out and to let him work his way out of the inning. The young freshman did just that managing to grind his way out with two fly outs to end the inning.

“I wanted him to finish the inning, to know that we had confidence in him and he responded well battling to get out of it. A coach can’t ask anything more than that. To leave everything you have on the field and Jack did that for us today. I’m proud of him,” were the sentiments of Coach Kirksey, after the game.

The Roadrunner hitters also battled. They scored a run in the third inning on a single by senior shortstop Andres Leyva who stole second followed by a walk by senior catcher Jake Rosenblatt. Senior third baseman Max Robinson scored Leyva with RBI single to left field, but with no outs, the Roadrunners stranded the last two runners on base.

In their top half of the fifth inning, Rosenblatt led off with a double to right center, Robinson doubled driving Rosenblatt home and senior Holden Miller connected on a fastball sending the ball over the right field fence for his first home run of the season. The Roadrunners now trailed 10-4.

Max Robinson relieved Freedman in the fifth and struck out two and made a good play on a slow roller in front of the plate just beating the runner. Robinson pitch another strong inning, facing just six hitters in two innings and striking out four of them.

The Roadrunners trailed going into the seventh inning 10-4. Leyva led it off with his second single of the game and then his second steal of second base. Rosenblatt followed with a line shot to right that cleared the fence for the Roadrunners second home run of the game. With the score now 10-6, the rally ended when Robinson grounded out to first, sophomore, Cooper Halpern lined out to short and sophomore, Michael Rosen struck out.

Coach Kirksey said he was proud of his team because they didn’t give up. “You can’t ask more from your team. They could’ve easily quit. We knew we were coming into a tough game against these guys, but we held our own. They gave us 100 percent of what they had and we came away knowing what it’s going to take in the future to beat them. We’re a work in progress and we made some today.”

Roadrunners play their next game Tuesday March 22 against the Paraclete High Spirits in Lancaster at 4 p.m.