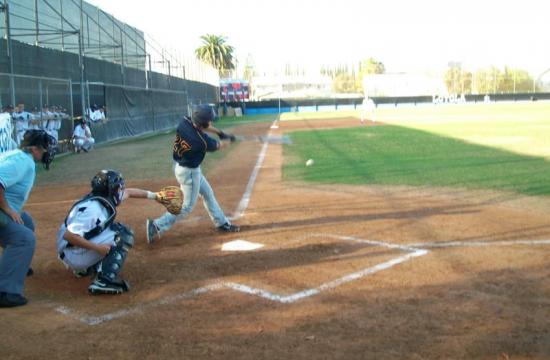 LOS ANGELES – The game started with the Lord’s Prayer, and as it turned out the Vikings needed divine intervention because they could not help themselves. They were outplayed and out hit in what turned out to be an 8 – 1 romp.

Loyola, the Catholic High School in the heart of Los Angeles, entered the game winless in the Easton Tournament and came away with the victory on a strong pitching performance by senior, Xavier Borde. The tall, left hander threw six strong innings; striking out six batters – giving up no walks and surrendering just five hits and one run.

That run came in the first inning – when Vikings’ center fielder Alex Turner, a sophomore, hit a deep fly ball that bounced off the fence in right center, just missing a home run by two feet. The next batter, sophomore Mason Landis hit a ground ball that bounced high into the air and by the time it came down he had safely crossed first base. With runners at first and second, junior Adam Padilla hit the ball to the right side, scoring Turner from third. Borde then walked junior David Tyre-vigil and allowed them to move up to second and third on a wild pitch.

But then the designated hitter, senior J.D. Locy, hit a hard line drive that would have easily scored two more, but it was snagged by the Cubs third baseman, who then stepped on third to double up Landis and end the only threat the Vikings were able to mount all game.

“It was the first time we were able to get a lead in a game, but it seemed like we didn’t know how to respond to keep it,” said Vikings Coach Sheldon Philip-Guide.

The Loyola team did respond in their bottom half by bringing home three runs. They never trailed again.

Vikings Pitcher Andrew Mcritchie, a senior, started by falling behind Loyola’s leadoff hitter, only to battle back and then force him to hit a slow roller to second that should have been an out but was booted. The next batter hit a ground ball that managed to find the hole, just off of the outstretched glove of shortstop Landis for a hit. With both runners going, Loyola’s third hitter smacked a strong hit to left field, scoring the runner from second and sending the runner on first to third. The failure to take the cut-off throw, allowed the batter to move uncontested to second, setting up runners in scoring position with no outs.

The sloppy play definitely seemed to affect the Vikings pitcher, who subsequently failed to hold the runner close at first and he easily stole second base. The next hitter drove a long fly ball that looked like it was headed toward the gap for more runs, but right fielder, senior Jessie Vasquez, made an excellent diving catch, reaching out as far as he could to catch the ball just before it hit the ground. The runner tagged up but was later stranded at third base after the last out, a long fly ball to centerfield.

Coach Philip-Guide said that he told his team that they had to start games with a better attitude and ready to play. But when asked if he saw anything positive about the game, he mentioned his pitcher, junior Johnny Barry, who came in to relieve Mcritchie in the bottom of the fourth inning with the bases loaded and one run already across. “He competed; he worked hard and didn’t let the situation affect him. I was proud of him. That was a real positive for him and for us to see him go after their hitters like he did.”

Barry struck out the first batter he faced and got the next Loyola batter to fly out – stranding all three runners on base. He gave up just one hit the rest of the way and did not give up any runs in two and two-thirds innings.

But the damage was done by then – with the Cubs getting 8 runs on 10 hits. The Vikings did manage to get 8 hits but they couldn’t bring anyone around after the first inning.

Coach Philip-Guide said that he felt that after the first inning, “they relaxed and couldn’t make basic plays and it caused our pitcher to feel like he had to carry the team on his shoulders.”

It’s a tough beginning to a new season, but the Vikings will be playing their last game of the Easton Tournament in Lancaster on Saturday at 11 a.m. against the Lancaster High School Eagles.