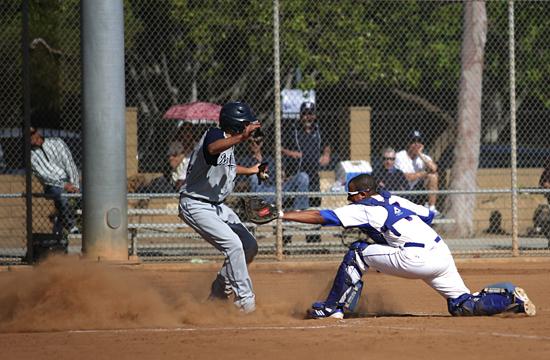 It was the first league game for the Crossroads Roadrunners, who are newcomers to the Alpha Division 5 League. Unfortunately for them it had to start against one of the best teams in the league – the Montclair Prep Mounties.

The Roadrunners were handily defeated 8 to 1 getting a real dose of the higher-level play right off the bat. They opened their season facing junior pitcher, Max Fried, who is considered by many to be one of the leading pitchers in Southern California. The lefthander, who has already signed a letter of intent to play for UCLA after his senior year, pitched well – holding the Roadrunners to just three hits and three walks, striking out five over six innings.

The Roadrunners were able to hit the ball hard off of Fried, but it always seemed to find a Mounties’ glove.

“The one thing we can take away from this one is that we faced one of the best pitchers in Southern California and we were able to put the ball in play,” said Coach Spencer Kirksey, who is also in his first year as the head coach of the Roadrunners. “That’s very promising for us.”

In the third inning, center fielder and sophomore Michael Rosen led off the inning with a line drive double down the third base line. He was moved over to third when senior left fielder Ryan Bhandari did his job by hitting behind the runner to the second baseman, which allowed Rosen to get to third. The next hitter, freshman right fielder Eli Rosenblatt, hit the ball hard to third, catching Rosen far enough off third base to get him into a run down. Rosenblatt managed to get to second base before Rosen was tagged out. That brought up senior shortstop Andres Leyva, who singled down the third baseline bringing home Rosenblatt, who had stolen third base. It was the only run the Roadrunners were able to get across against Fried. Leyva had the only other hit in the game.

“We shot ourselves in the foot on defense,” Kirksey said. “Our defense went the other way this game and you can’t win when you don’t play good defense.

The Mounties were leading 3-to-1 going into the fifth inning when the game took a drastic change. The first batter was senior first baseman, Paul Aldape who led off with a line shot that cleared the center field fence. Then senior pitcher Holden Miller, who had been pitching a good game up until then, loaded the bases on one hit, a walk, and a questionable call that came when he fielded a sacrifice bunt and threw to sophomore second baseman Brandon Scott, who had come over on the play to cover first base. It was ruled that the throw pulled his foot off of the bag, loading the bases.

On the next pitch, Miller threw a wild pitch to the fifth batter in the inning that got past senior catcher Jake Rosenblatt, enabling the runner from third to score. Miller picked up the ricocheted ball out in front of the plate and threw to try and get the runner going from second to third. Unfortunately, he threw it past the third baseman and the left fielder – who was running up to back up the play. The one wild pitch ended with all three runners coming home to score and leaving the Roadrunners trailing 8 to 1.

“Holden didn’t have a good game. He didn’t have his best stuff, but he battled and I know he’s going to be ok. It’s a long season,” said Coach Kirksey, who brings a positive approach to the game and added that he feels his team is responding well.

The Crossroads Roadrunners will pick from here and go on the road to play Thursday, March 18th at 3:30 p.m. against Campbell Hall Vikings.