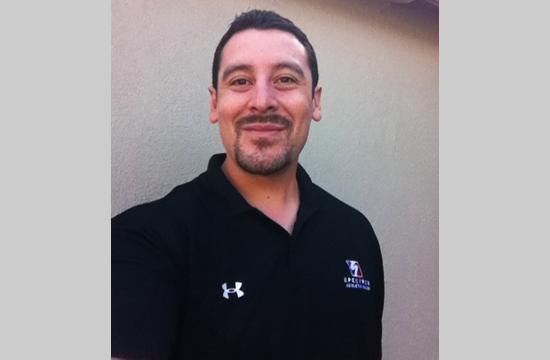 Life can change in a week.

In April 2009, while walking in Huntington Library with his wife, Lisa, Michael Maya, a members manager at Spectrum Athletic Club on Olympic Boulevard, suddenly couldn’t stand any longer. He knelt down and told his wife he couldn’t walk. It was a Monday.

Lisa advised Michael to go to the doctor. The doctor saw Maya on Thursday and planned tests for Friday.

“I will never forget that doctor’s name,” Maya said.

Dr. Randy Debber asked his team for a “rush delivery” on Maya’s tests. He called the Mayas on Sunday. They called back Monday.

“Hearing the words ‘You have cancer,'” Maya said, “it changes your whole world around.”

But he already knew because he had searched the Internet for testicular cancer symptoms. The three signs were enlargement of a testicle, groin pain, and back pain. The back pain was the reason Maya went to his knee. Michael already had the other two. He just didn’t tell anyone.

That second Wednesday, nine days after the incident in the library, surgery removed Michael’s left testicle. The cancer had spread into Michael’s abdomen. He would need radiation treatment.

Michael showed up at 3 p.m. five days a week for the next four weeks. And then there was no more cancer.

“That routine was gone, so that’s when I turned to running,” Maya said.

Running was a release. It was a routine – a way to get back into shape. But that wasn’t what was most important.

Michael ran two half-marathons in 2010. But there was a team in the second half-marathon he felt he should join. It was the American Cancer Society.

“I realized at that point, aside from doing it for myself, I had this need to inspire other people, to help other people that were going through the same situation I did,” Maya said.

He joined the DetermiNation program, a division of the American Cancer Society that focuses on marathon, half-marathon, and triathlon athletes who want to raise money for cancer research. Maya raised almost $2,000 in February 2011.

“I think it’s brave, I’m extremely proud, but this is who he is. This is part of his character,” she said.

Now, for himself and his new team, Maya will run in the LA Marathon on Sunday. He has never done a marathon but has trained hard to complete it. He ran 19 miles and walked one more on March 6.

“The philosophy is if you can run 20 miles, you can will yourself through the last six,” Maya said.

From not being able to walk to running a marathon, Maya has beaten cancer. But he’s glad he had it.