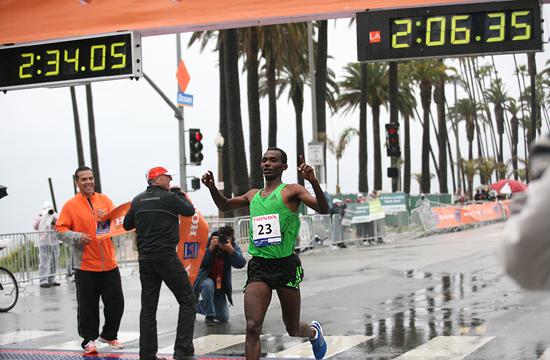 Markos Geneti has lived almost as many years as the L.A. Marathon has existed. Together both the runner and the event shared in new experiences as the twenty-sixth version of the annual running competition navigated through several iconic Los Angeles area neighborhoods en route to its scenic finish line in the City of Santa Monica on March 20.

For starters, the Ethiopian-born Geneti had run his first-ever marathon. Coincidentally, his finish time was also a new experience, what with his finish of 2 hours, 6 minutes, and 35 seconds the fastest finish ever in L.A. Marathon history and second fastest in the world in 2011.

Geneti was also the first non-Kenyan man to win the L.A. Marathon since 1998, when Zebadayo Bayo of Tanzania crossed the finish line first in the men’s heap.

The L.A. Marathon itself, was not so lucky.

According to the National Weather Service in Oxnard, Calif., it was a record-breaking day for the L.A. Marathon. With a record 3.06 inches of rain in Santa Monica falling throughout the day, this year’s edition of the race was the wettest ever on record.

A former marathoner who trekked from Orange County and claimed a spot along the final stretch on Ocean Avenue said the rain was probably a nuisance for most runners.

“Getting all wet weighs you down and your clothes start to stick to you,” Brad Guss of Costa Mesa, Calif., said.

Just the same, emergency officials scrambled to battle another rare occurrence for the L.A. Marathon: hypothermia. According to the Santa Monica Fire Dept., at least 25 runners were treated at local hospitals for hypothermia. (See “Weather Challenged LA Marathon Runners, Medical Teams” in the Health and Fitness section of this issue, on pg. B11).A

Still, that did not prevent an estimated 23,000 runners from storming out of the gates at Dodger Stadium shortly after 7 a.m. on Sunday and pacing themselves for 26.2 miles west toward the California Incline in Santa Monica, where Mayor Richard Bloom and Mayor Pro Tem Gleam Davis enthusiastically welcomed runners and cyclists across the finish line as early as the 9 o’clock hour.

Talking to the Mirror at the finish line, Bloom said there was no better place than Santa Monica for the L.A. Marathon to complete its 26.2-mile journey.

“It’s the perfect place to end the Marathon. What more fitting place, a place where we value human activity and a beautiful place for the Marathon to end, right here at the ocean,” Bloom said, and the wet conditions helped make the annual race a more memorable one. “It’s raining, so that increases the challenge a little bit; this race is just inspirational.”

Just as inspirational was professional sumo wrestler Kelly Gneiting, who crossed the finish line more than nine hours after he started to earn the honor of heaviest man to finish the L.A. Marathon; weighing in at 400 pounds, Gneiting set a Guinness World Record.

While all runners appeared to be wearing shoes at the L.A. Marathon, Firehiwot Dado paid tribute to fellow Ethiopian Abebe Bikila by running the final leg of the Rome Marathon shoeless en route to her third straight first-place finish there; Bikila earned Olympic gold in 1960 after running a marathon barefoot.

Back in Santa Monica, had American runner Amy Hastings maintained the lead she had for almost the entire race and finished first, it would have marked a rare feat in which the number one male and female runners to cross the finish line were first-timer marathoners.

Back in the men’s camp, Kenyan Wesley Korir fell short of being the event’s first-ever three-time winner.

Both Buzunesh and Geneti earned $25,000 and a 2011 Honda Insight for their respective finishes, with Geneti earning an extra $100,000 to be the first runner irrespective of gender to cross the finish line.

After the race, men’s winner Geneti said he plans to donate his winnings to a school in the Ethiopian capital city of Addis Ababa.

No American, man or woman, has won the L.A. Marathon since both Paul Pilkington and Olga Appell jointly did so in 1994.

The National Weather Service reported 2.49 inches of rain in Downtown Los Angles, where the marathon started, as well as 3.27 inches in Hollywood, 3.32 in Westwood, 2.84 in Culver City, and 4.19 in Beverly Hills. Previously, the wettest L.A. Marathon on record was in 2000, when event officials reported about 1.6 inches descended upon runners. Flash flood warnings in the Santa Monica Mountains and high surf advisory here in the city were also in effect on Sunday.