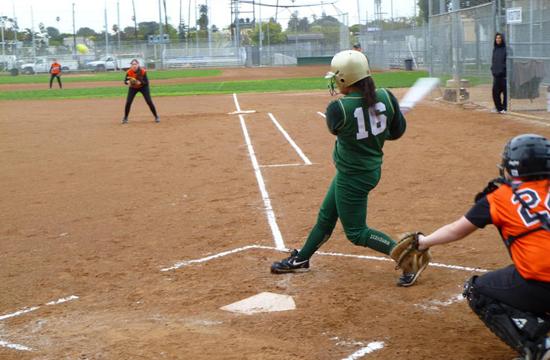 Even with the rain coming down – the St. Monica Mariners varsity softball team was intent on getting a game in – having already had two games canceled this week due to the inclement weather. With the excitement of being able to play, the ladies of St. Monica showed their enthusiasm by quickly jumping out in front of the Beverly Hills Normans in the first inning with four runs.

Unfortunately, leading 7-0 with just two outs short of being an official game – the umpires called it because they determined the field had become too drenched for play to continue.

Junior Alex Villa started off the hitting in the first inning by doubling to the gap in left, followed by an error hit by freshman Katie Grimm who stole second and with runners on second and third, senior Shaina Hernandez singled to right field driving in Villa from third. Hernandez took second on the throw home and with runners on second and third, junior Emily Miller hit a line drive base hit – driving in two more runs.

With the score 4-0, it was enough for senior pitcher Alex Wolansky, whose fastball and changeup baffled the Norman hitters all game. She had five strikeouts going into the fifth inning.

Junior Ariel Hackney, who had missed the first four games because of her religious commitments as campus minister, showed very little rust in her play – hitting a big home run over the left fielder’s head to start the fourth inning. The Mariners scored two more runs and led after four 7-0.

In the top half of the fifth, the first Normans hitter struck out and then the game was called because of rain. It was not clear when the game would be completed.

“With league play getting started and having two games to make up – I don’t know when we will be able to finish this one. But we’ll work it out,” said Coach Larry Rodriguez of St. Monica.

Coach Rodriguez added that the girls of St. Monica have been playing well and are ready for league play. “We have a great bunch of ladies who work hard and love to play. The three games that we lost were really close and there were just a couple of miscues that were understandable given that some of the girls had been unable to make it to the first four games. But even in those games, we were right there. I’m expecting to have a great year.”