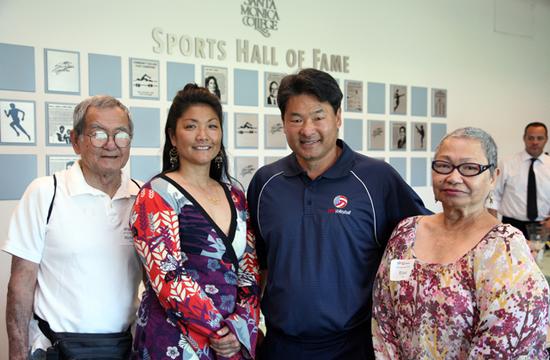 Three Santa Monica College alumni from the same family – Eric, Gary, and Liane Sato – were inducted into the school’s foundation sports hall of fame on March 31. The Sato’s induction is a recognition of their legendary contributions to volleyball. Indeed, Santa Monica’s Sato family is regarded by many as America’s “First Family of Volleyball.”

It all started several decades ago when all five Sato siblings – also including brothers Glen and Scott – attended Samohi where each played Viking varsity volleyball with distinction. All five matriculated onto Division I universities where they participated in intercollegiate volleyball. The three SMC honorees moved on to represent America in international play, including the 1988 Seoul and 1992 Barcelona Olympics. Eric played defense and Gary coached the men’s squads in both Olympics. In Seoul the brothers won Gold Medals, and in Barcelona they won Bronze. Likewise, Liane played on the women’s squad in both Olympics bringing home a Bronze Medal from Barcelona. The Sato Family credits also include a long list of championships in other national and international play including NCAA, World Cup, and World Championship meets.

On March 31, Gary and Liane returned to their SMC alma mater for the induction ceremonies, including a question and answer session with students. How did the five Sato’s get involved in volleyball? Turns out that Santa Monica and recreational volleyball have been a match going back decades and the Sato parents, Richard and Elissa, were avid recreational players before their children took up the sport. What was the best part about going to the Olympics? Liane notes that the entire Sato family – all seven of them – were able to attend both the Seoul and Barcelona Games. Advice to current student athletes? “Go to class,” is the advice offered by Gary whose academic commitment enabled him to become a Doctor of Chiropractic alongside his distinguished volleyball career.

The SMC student session was moderated by Anna Collier, Chair of the SMC Kinesiology & Athletics Department and a long time Sato family friend. She notes, “Volleyball, SMC and the Sato Family are synonymous. The Sato’s work ethic, family unity and success should be role model for others.”

The Sato’s volleyball contributions continue. Gary is helping coach the men’s national team in its run-up to qualify for the 2012 Summer Games in London. Eric heads the Sato Volleyball Academy in San Diego. Liane is on the faculty of Samohi where she teaches Physical Education and also coaches the boys and girls volleyball programs. In 2006, Coach Sato’s Viking boys team won the CIF Southern Section Championship, the school’s first volleyball championship in 27 years. The Sato family’s remarkable Santa Monica-based sports saga continues.