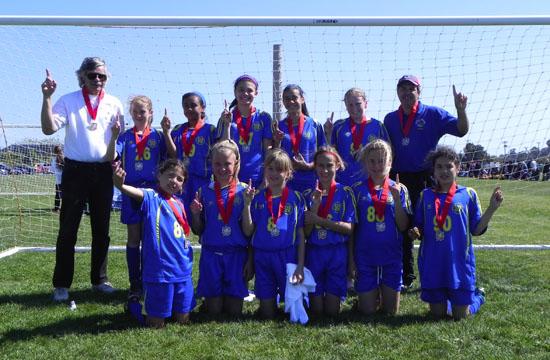 The Santa Monica spring select American Youth Soccer Organization team of girls under 12 are the proud champions of the Blue Flight at the prestigious Founder’s Cup Tournament, that was held this year in the South Bay on the weekend of April 9.

The Santa Monica squad won five games in a row to bring home the first place trophy, including wins over San Pedro, Palos Verdes, and three teams from Torrance. The closest call came in the semi-finals with Santa Monica prevailing over North Torrance United 2-1 in a thrilling overtime. They won the championship 2-0 over co-finalist West Torrance.

“I am really proud of our team,” notes Head Coach Sammy Romo. “We defeated teams that had beaten us in earlier spring league play, and for many of our players it was their first ever tournament championship. They worked incredibly hard and really rose to the challenge.”

The team next takes the pitch in tournament battle at the annual Strawberry Cup in Camarillo May 14-15. AYSO will resume regular league play in September, and Santa Monica players ages four-and-a-half to eighteen years can sign up at AYSO20.org