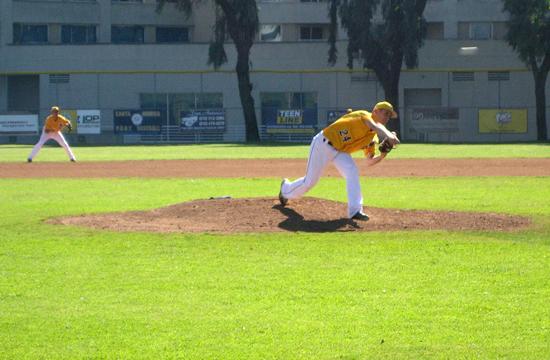 It’s commonly known that baseball requires mental toughness and the Vikings’ mental strength is certainly being tested during this first half of the season. Facing a fundamentally sound and very talented Palos Verdes Kings, the Vikings were battered, this time, 16-1 to suffer their eleventh loss of the season.

It’s no longer just the losses that are so difficult for the Vikings to endure, but even more difficult are overcoming the mental affects of losing game after game that is just as much of a concern to the Coaching staff.

In the first inning today, the Kings immediately scored six runs against pitcher Danny Galvan, to get off to a six nothing lead. You could see the heads bowed in the field almost giving up before they even had a chance to bat.

“We told our team not to worry about the score. We knew that Palos Verdes was a very good team. But we wanted our guys to just go out there and play solid. Make plays and not make mental mistakes”, said Coach Sheldon Philip-Guide. “Unfortunately, after they scored more runs in the first inning than we’ve scored in any of our games. It seemed they just gave up.”

By the end of the third inning, the Vikings were being beaten so badly that they all but gave up. Trailing 10-1 their mental strength was quickly dissipating and it was reflected in their play with slow rollers going under the glove of sophomore Mason Landis, or pass balls rolling under the glove of a disheartened catcher and senior Mitchell Eby. And there were the many missed cut off throws that allowed the Kings’ runners to advance the extra base. The mistakes just kept compiling and the Vikings were unable to regain their mental strength.

“I’m hoping we can win at least one game in the coming week before we enter league play after the Spring break,” said a dejected Coach Philip-Guide. “We’re going to continue to work at it and keep striving to play that solid one game where we don’t beat ourselves. That’s what I’m looking for right now. For everyone to get on the same page with that one goal in mind, not to make errors in the field and to do the little things it takes to win. If we can do that we will win our share of games. We’ll get there.”

Coach Philip-Guide has not lost confidence in his team – now it’s up to each of the players to find the confidence they need to win in each other and in themselves.

Starting next week the Vikings will play in the Babe Herman Tournament at Casey Stengel Field. They play Crescenta Valley another tough competitor on Sat. 7 p.m. Followed by North and Oak Park at Samohi.