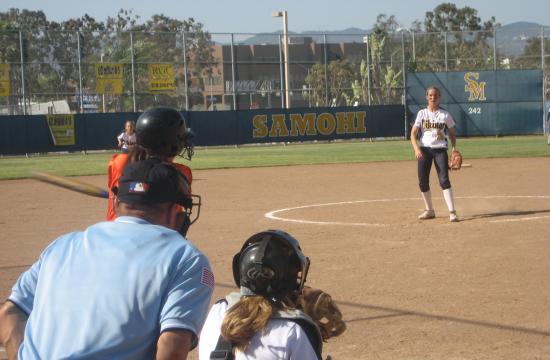 If there was ever a lopsided victory, the Samohi Viking Girl’s softball team showed it Thursday against the Beverly Hills Normans, winning 15-0 after only five innings.

For the second time in two games, the mercy rule was enforced in favor of the Vikings to limit their opponent’s potential degree of defeat. By the second inning, the Lady Vikings had scored fifteen runs on twelve hits. It was a perfect example of why the rule exists.

Beginning in the third inning, the Vikings started to play the game differently, working on different aspects of their game that would generally be left for practice field and not a game. They started working on their slap and switch hitting. After the third inning, the game became so superfluous that Coach Marybell Moreno was even instructing her team to leave early when on base. Doing so is a violation in softball that results in the runner being automatically called out.

“We try not to be too obvious about it because we don’t want to insult our opponent, but yes I did tell them to leave early so that we could get the game over with.” Coach Moreno also added that “these kinds of games are an opportunity for us to work on the little stuff.”

But before they started working on the little stuff, the Vikings hit a ton against the Norman pitching, especially in the second inning when seventeen batters came to the plate and fifteen of them scored. Freshman Sara Garcia had two doubles and five RBI in the inning. Sophomore Arielle Casillas and Senior Amanda Delgadillo had two hits, two RBI and scored two runs apiece.

While the Vikings were having a slugfest, senior Natalie Abel was putting on a pitching clinic, striking out 11 Norman hitters and allowing just one hit over five innings.

“We’re starting to mesh together and it was just our day today,” Coach Moreno said, “but we’ve got to keep working at it. We’ve got some tough games coming up and then the El Segundo Tournament, which we won last year so we’ve got a lot of teams that will be wanting to beat us this year.”

The El Segundo Tournament begins April 30 against Village Christian. But they have three league games before then, the next one coming up against the Morningside Monarchs on Thurs. April 21 at 3 p.m.