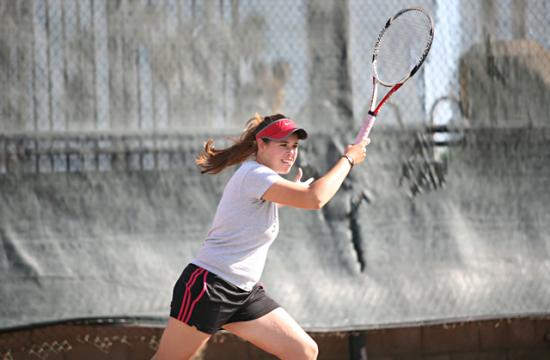 In the No. 1 singles, SMC freshman Katerina Mozolyuk won convincingly in straight sets 6-0, 6-1 over RCC’s Sarah Racataian. Mozolyuk showed no weakness in her game, making very few errors and showing why she is undefeated this year and ranked as the top singles player in the conference.

At No. 2 singles, fellow freshman Criss Rodriguez – ranked No. 3 in the conference this year – also won her match in straight sets 6-3, 6-0 over Brooke Vorhees.

Krystal Hansard, No. 12 in the Western State Conference, was on court three and took her match against Natalie Tomlin in straight sets, and Gwendolyn Kauffman won 6-0, 6-3 over Jeannette Rodriguez.

Hanna Sacher and Jutta Collet both played well, but dropped their respective matches in three sets.

This sent the competition into doubles with only one win needed in the three matches to get the team win, and the WSC’s top doubles pair Criss Rodriguez and Krystal Hansard delivered, playing almost flawlessly to bring home the victory for SMC with the 6-1 and 6-0 win.

“I really like our team’s performance today. They are coming together as a team and getting better as the season goes”, Coach Richard Goldenson said.

Coach Goldenson is in his eleventh year of coaching at Santa Monica College. He was pleased that his team was moving on. “We now move on to the second round of the regional playoffs.”

The Corsairs advance to the third round of the California Community College playoffs against Grossmont at Reed Park on May 4.