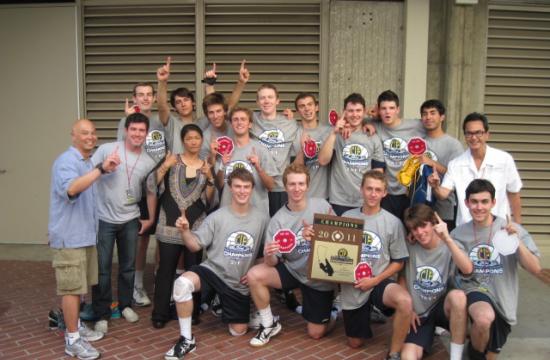 Samohi senior reserve Ryan Odening had the honor of placing the final serve as the Vikings won the fourth game 25-23 and secured the school’s second CIF volleyball championship in the last five years. Following a brief awards ceremony, students, parents and other supporters stormed onto the court to celebrate Samohi’s victory.

It was no easy feat for the Vikings. San Gabriel gained an early and sizable lead with superb passing and returning everything Samohi delivered. Momentum shifted slightly when Viking David Cline reeled off three straight ace power serves in the middle of the game, and the Vikings climbed to within three points before losing 22-25.

Game two was pivotal. Once again San Gabriel jumped to a major advantage, at one point leading 17-10. But the Vikings turned up the intensity. They were still down 21-24 with San Gabriel seeking match point. With a strong team effort, including four kills by David Cline in the closing volleys, the Vikings won the second game 28-26. The Vikings fought on to win game three 25-21 and the deciding game four 25-23 to bring home the championship.

“San Gabriel was one of the toughest and most disciplined teams we have played this year,” Coach Sato said. “The Viking boys have worked really hard this season and they deserve their rings. I appreciate the support we have received from our Administration, including Principal Dr. Pedroza. Also, we could not have won the championship without the support of the awesome faculty and student body who came out to cheer us on.”