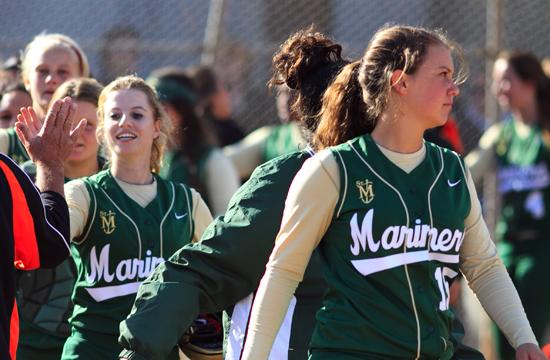 In the sixth inning, with the Mariners trailing 7-5 , Villa went to return a pitch to senior pitcher Alex Wolansky and the Santa Ynez batter taking practice swings struck the catcher directly on her throwing hand with a hard swing of her bat. It sent Villa reeling in pain flat on her back in the dirt. The game was delayed almost 20 minutes as nurses, coaches and parents tended to her injury. Villa was taken from the game to the hospital for X-rays on her arm.

“She has never cried like that so I knew she was hurt bad”, said Coach Joey Carrillo.

Two innings prior to the accident, Santa Ynez had jumped out to a 7-1 lead in the top of the fourth inning, but St. Monica mounted a comeback in their half of the fourth scoring four runs, including a clutch double by Villa with the bases loaded that drove in three runs.

In the fifth inning – both teams played tough defense and held each other scoreless. But in the sixth, the game took a violent turn. It was a shocking event that undoubtedly changed the momentum of the game. When play resumed, St. Monica committed three costly errors and Santa Ynez was able to score four runs.

“It was an unfortunate turn of events and it caused us to have to place some of the girls in positions they had never played before. Alex Villa is one of the leaders on this team and her injury definitely hurt us,” Coach Carrillo said.

Santa Ynez’ sophomore pitcher Heather Kunkle pitched a very strong game and topped off her performance in the circle with a home run blast in the seventh. She gave up 10 hits to the Mariners but struck out eight to lead her team to the victory.

“We had a great year. For a school our size to even be here is quite an accomplishment”, said Coach Larry Rodriguez. He went on to praise seniors Shania Hernandez, Angelica Douglas, Stephanie Baghay and Patty Olmedo for their leadership and contributions throughout the year and then made special mention of Alex Wolansky, who pitched for the Mariners four straight years.

Coach Rodriguez having returned from the hospital reported that Alex Villa’s wrist was badly swollen but that X-rays were inconclusive as to the severity of her injury. He said she would have it checked again next week once the swelling could go down.