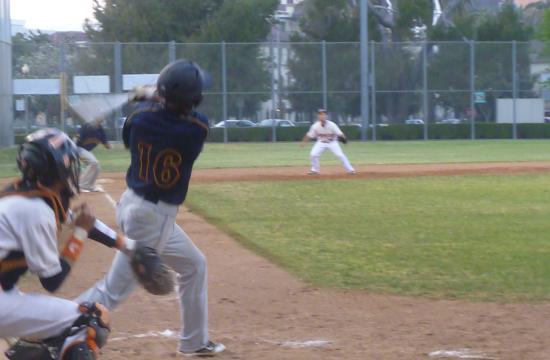 Beverly Hills – The Samohi Vikings baseball team beat the Beverly Hills Normans 13-1, led by Seniors Matthew Stancil and Adam Padilla. It was a one sided game all the way that was called after five innings due to the 10-run mercy rule.

Padilla pitched well for the Vikings, throwing all five innings. He gave up just one run on six hits and struck out five to get the victory.

From the start, the Vikings seemed to hit the Norman’s pitchers at will. They socked 14 hits, four of them for extra bases. The Vikings broke it wide open with six runs in the fourth to make the score 10-1.

Matthew Stancil went four for four and just missed the cycle when a potential home run hit the top of the centerfield fence. He ended the day with five RBI. Adam Padilla, in addition to his pitching, contributed to the offensive production going three for four, with a double and three RBI.

“This was our best game this year,” Samohi coach Sheldon Philip-Guide said. “A total team effort; we hit the ball well; we pitched and defended well. It was just a good game all around for us.”

Samohi currently is 7-0 in their league play and Culver City is 8-0. If Samohi wins on Saturday, the two teams will be tied going into next week’s games. They meet for the last two games in their league play. First one is on Tues., May 10, at Culver City and then again on Thurs., May 12, at Samohi. It will decide the winner of the Ocean League. If they split the games, the winner of the top seeding going into the CIF playoffs is determined by a coin flip.

“Right now it’s all about Inglewood Saturday at Samohi,” Philip-Guide said. “We have to get past them first and then next week we’ll think about Culver City to determine who wins our league.”

Coach Philip-Guide said he did not want his team to look ahead that he was going to make sure his team took one game at a time.

“If we don’t win Saturday, next week doesn’t mean a thing. So we don’t want to overlook Inglewood.”

By mirrormmg May 6, 2011
in Sports
Related Posts