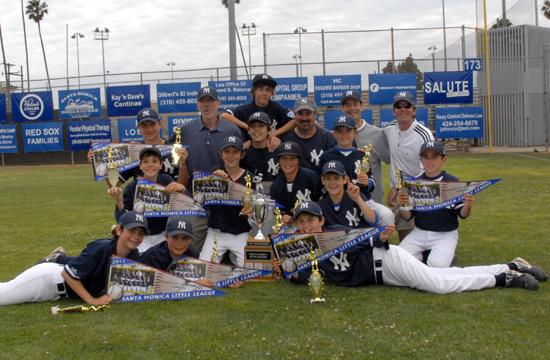 It was the second consecutive major championship for Coach Slinger, whose Yankees also won it all in 2010. His team entered the championship game on an eight-game winning streak, but the two teams had split the four games they played during the season.

Both starters for the Yankees Alex Rubinek and Micah Maccoby pitched well through four innings, holding the Giants to a 2-2 tie going into the fifth inning. Maccoby also contributed an RBI triple in the third inning to tie the score 1-1.

Giants pitcher Holt Jones also pitched well through four innings, but Yankee Ryan Slinger broke the tie in the fifth by hitting his first home run of the season to deep centerfield. It couldn’t have come at a better time. It set off a four-run rally that put the Yankees on top for good. Wesley Burton and Jack Kelly each had hits and an RBI in the inning.

Mikey Roberts led off with a hit in the sixth and the Yankees scored three more runs in the inning to cap the score and gain the championship.

In the earlier contest in the AAA Minors, Slinger’s White Sox saw an even match with the Cubs for the championship. Anthony Adams started the game for the White Sox, suffering four unearned runs in the first on hits by Ryan Banchik, Colton Anderson, Alex Delgado, and Nathan Perez and then a two-run triple by Jeffrey Hann, the Cubs’ pitcher. But the White Sox fought back in their half of the first, scoring four runs of their own with hits by Peter Smith, Cody Rains, Danny Lacey, and a triple by Anthony Adams.

After the first inning, the Sox defense settled down and their usual committee of pitchers, Smith and Rylan Pizzuto, came in to hold the Cubs to four runs in the middle innings. Owen Slinger came in to pitch the fifth and served up a big double play to get the Sox out of the inning.

Trailing going into the bottom of the fifth, the White Sox rallied for four runs to take the lead on big hits from Smith, Slinger, Adams, Rains, Pizzuto, and Nick Downey. Slinger then closed out the Cubs in the sixth to get the victory and the White Sox gave Coach Slinger his first championship of the day.

Coach Slinger said he does what he can to find the time to coach two teams with his sons, Ryan on the Yankees, and Owen on the White Sox.

“They’re only young once and I don’t want to miss these very special times with them,” Slinger said.

Ryan also served all year as his first base and assistant coach for the Minor White Sox. Coach Slinger also gave lots of credit to his assistant coaches John Kelly, Matt Maccoby and Ron Altman for the Yankees and Ryan and Red Espana for the White Sox. He also mentioned that his staff at work was a big help at making it possible for him to coach his sons on two different teams.

Both the Major Cubs and Yankees will represent Santa Monica in the Little League District 25 Tournament Championships beginning next week at Culver-Marina.