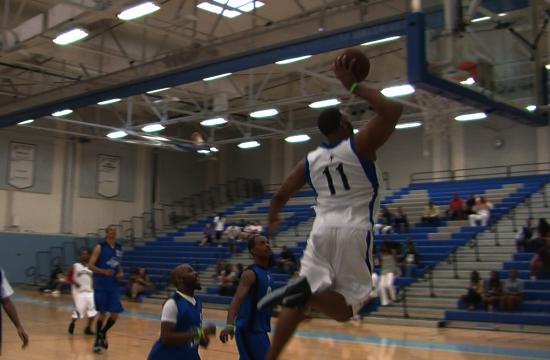 It wasn’t All-Star Weekend at the Staples Center, but it felt like it.

The academy aims to be a community-based charter school that focuses on the importance of an education in finance and community development, according to a press release. It is scheduled to open in August.

“I wanted to get more involved with the kids and give them more of a support system so they had the confidence to get out in the world and compete,” said founder Omar McGee, who started the Dave Bing Foundation when he was at Howard University.

Actor Omar Gooding from the T.V. Show “Hangin’ with Mr. Cooper” showed his support by coaching the blue team.

“We’re dealing with empowering and helping kids learn to control their finances and be more aware of their financial situations, especially at a young age,” Gooding said. “That’s something I can relate to. I wish I had an institution like this around when I was young to help me do my thing.”

Music producer Rodney Jerkins said this school will do a lot of good.

“In our culture, in African-American culture… we see what’s on the video screen and we think we’re supposed to have it,” Jerkins said. “It’s good that he (McGee) is creating this because it’s really about building businesses and owning things. What David Bing is doing is he’s creating awareness and structure in finance and that’s needed right now.”

Former Utah Jazz small forward Bryon Russell hasn’t played in the NBA since 2006, but he works out with McGee. He showed up on Saturday night to help bring attention to the cause.

Actress Camille Winbush from “The Bernie Mac Show” did not play, but she said the academy was a good idea.

“Finance is so important,” Winbush said. “You have to start from an early age so that when you grow up, you’ll know what to do and you can help out your family.”

Vice Chairman of the 48th Assembly District Daymond R. Johnson also spoke to those in attendance about the importance of finance in the Los Angeles community.

“We have a 19 percent unemployment rate (in South Los Angeles),” Johnson said, “so bringing this resource to South Los Angeles would be one of the biggest things we can do as individuals, parents, and as government leaders.”

The game itself brought its own entertainment as both the blue and white teams scored more than 100 points with plenty of alley-oops, breakaway dunks, and three-pointers along the way. K-Money from the Venice Basketball League and Zig-Zag from the L.A. Lights showed acrobatics with their dribbling skills to keep the crowd mesmerized.

And if that wasn’t enough, a slam-dunk contest took place at halftime that allowed And1 Streetball player Young Hollywood to show his leaping ability.

The event raised $6,000 for the Dave Bing Academy of Finance. The celebrities involved said McGee was a big part of why they showed up. McGee hopes this game can be an annual fundraising event to help the Academy.

“(We need to) bring in more support to the inner cities because it’s really needed,” McGee said. “I’m trying to build a school that the community will be proud of, society will be proud of and developing scholars.”