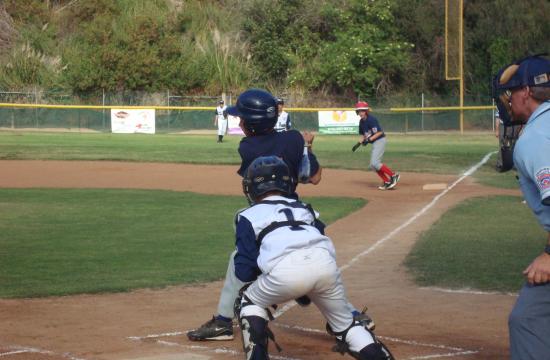 NVLL pitchers Matthew Miesler, 12, and Dustin Dehennis, 12, combined for a total of 15 strike outs, while giving up only four hits and three walks.

“I was definitely impressed with our pitching today,” said NVLL coach Steve Atkins. “When you pitch like that you only need a few runs to win. We played good fundamental baseball today. We came out to win and we played well enough to do just that.”

Pitching for SMLL was almost as strong, with 12-year-old starter Chris Cerceda striking out four in two innings.

Offensively, NVLL scored twice in the first inning on a base hit by leadoff hitter Nicklas Atkins, 12, followed by a double that was lost in the sun in right field. Cerceda had struck out the next two batters, but with runners at second and third, Michael Flores, 11, hit a 1-1 pitch up the middle to score both of the NVLL runners.

It stayed 2-0 until the bottom of the fourth inning when SMLL scored a run on base hits by Micah Maccoby, 12, who made it to third on a passed ball and wild pitch, and Aiden Cullen , 12, who drove Maccoby in.

In the fifth inning, though, Ryan Diarte, 12. hit a double off the centerfield fence that scored Miesler and Jack Demello, 12, to put the game out of reach at 4-1.

“It was a well played game but we need to hit to win,” said SMLL coach Mike Slinger. “We spent two hours in the batting cages today before the game but we just couldn’t hit the breaking ball. We took too many good pitches. If you look at this game it was basically two fly balls that could have been caught that made all the difference.”