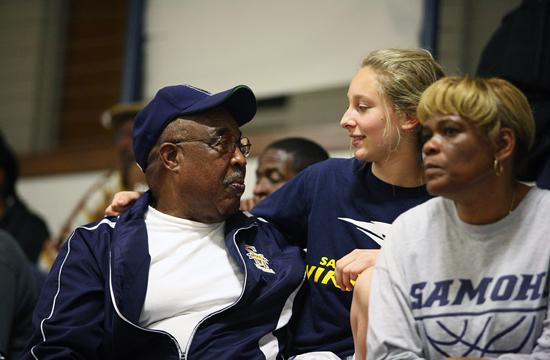 In a back room is a closet that has photo albums of Heavens’ memories. He needs it to show people, but he doesn’t need it to tell people.

He was a little league coach who won league championships and was an assistant coach for the SaMoHi softball team in 2010 CIF Championship season. People say Heavens spawned top-notch talent. But his stories make these professionals human.

According to Heavens, “When he would throw it in from right field to home plate, it was like a rod coming down. He didn’t throw one hop. I see Rod throw all the way in, man, and the first baseman couldn’t cut it off. And it was there (on target).”

“If you walk him, you can give him second and third. He’s going to steal home.”

Dana McLemore was an NFL kick returner for six seasons.

“I watched him in his junior year, playing football out at Venice High, and I said, ‘Dana, you know what I want you to do? Go into that weight room and work on weights and forget about baseball.'”

“People say you’re a good coach, you can wear the towel,” Heavens said. “But if you have the horses and you can put them together, it don’t take a heck of a ball coach to put a good team together. You just have to keep discipline on the team and I was a good disciplinarian.”

Tony Todd and friends of Tony Todd will say, “Tony knows everybody.” If he has a prospect at SaMoHi with the potential to get drafted, he won’t be afraid to call on that prospect’s favorite player to provide a word of advice. Tony gave a video of Torii Hunter to his center-fielder to show him he needs to continue to play “Long toss.” Tony says that’s what John taught him.

“John bought me my first baseball glove,” Todd said. “My dad wasn’t really there for me as a kid, so John took over those responsibilities and I look up to him.”

Todd said it took discipline to keep the kids on track. If there were kids with nothing to do, he said Heavens would take them to the field and throw them 100 curveballs “because ‘You have to be able to hit the curveball.'” If you made an error in practice, Heavens would hit another one to you that was even harder.

Heavens said his competitive drive came from his boxing days in St. Louis, Mo. He was an amateur who lost his first bout at the age of 14 to a 29-year-old. John was told the older man was just as skilled as he was, so the fight took place.

“When the fight was over, they raised Richard Rollins’ hand. I’ll never forget that day,” Heavens said. “My grandfather said, ‘Well, you probably had your last fight you get your butt whooped.'”

Heavens went back to the boxing gym and won a rematch and many more fights in the Golden Gloves.

He said he only wanted the kids to have the same desire to compete he had.

“It was good fun, being around the kids,” Heavens said. “And to see them grow up and turn into young men is tremendous. They still treat me like I’m special in their life. That’s great. It makes me feel good.”