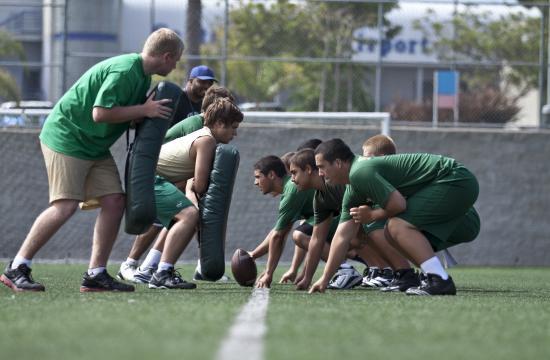 In a game that featured five total interceptions and only two total touchdowns, the St. Monica Mariners lost 9-6 in the first round of the CIF Football Playoffs in 2010.

That was the past, and St. Monica football coach Adam Guerra took the helm in January. He has already made an impact.

“The real big shift for these kids was the offseason program,” Guerra said. “They’ve all gotten drastically stronger, put on weight, strength and that’s been a major difference. (There are) the people that have been at the school for awhile, and they just can’t believe how much bigger and stronger they’ve gotten.

Success came last year for the Mariners, as they posted an 8-3 record and won the Santa Fe League. But Guerra said this year, they believe they can go farther in the CIF Playoffs than last year.

“We break everyday with the number 14,” Guerra said, “because it’s going to take us 14 games to win the championship. That’s our goal, and what we’ve been harping on is physical conditioning and mental toughness to last, and come to play week in and week out.”

The good news for the Mariners is the talent in the trenches with two senior anchors in Justin Kennedy and Patrick Romero. That will help the Mariners replace quarterback Matthew Partyka’s 2323 yards of total offense and 29 touchdowns. Juniors Luke Cain and Lukas Dretzka will battle in training camp to be under center in the fall.

Partyka benefitted from being in a quarterback-led offense, as he was not only the leading passer, but also had the most carries of any ball-carrier on the team. Guerra brings in a pro-style offense to take the pressure off the quarterbacks and let the line clear holes for the running backs.

“We are building for long-term success,” Guerra said. “You can’t just hang around, waiting for the next great quarterback to show up. To do that, you have to run a system that stays consistent year in and year out that stays multiple that allows us to take advantage of the personnel we do have.”

The Mariners are deep at running back, with senior Sean Martinez and junior Nicolas Pegnato getting a majority of the touches and hopefully eclipsing 1000 yards apiece with junior fullback Kevin Holubowski clearing the way. Guerra said the team’s strength up front and in the backfield will allow them to stick with a simple strategy to win: run the ball, play-action pass and play great defense. In the offense last year, no back on St. Monica’s roster eclipsed 429 yards.

The Mariners will start training camp on August 8.