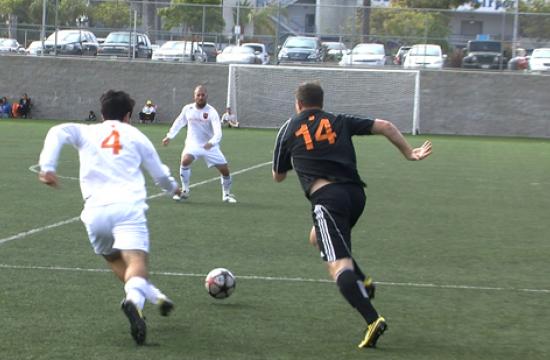 Youth sports are given first priority to fields, and allocation to these groups is based on the number of Santa Monica residents in them. They are also prioritized by sports season – giving football and soccer priority in the fall and baseball in the spring.

In addition to these criteria for allocation, there are certain times of day that are requested over others. Highest demand times are weekdays during school months between 3 and 5 p.m. for school sports; and for youth sports from 5 to 9 p.m. On Saturday and Sunday the high demand times are from 10 a.m. to 5 p.m. That is 13 hours a day on weekends and six hours a day during the week. This leaves two hours during the week and six hours on weekends for adult access to the fields.

“With over 100 adult soccer teams in the city you can see how we cannot possibly fulfill the demand for fields,” said Richard McKinnon, a Parks and Recreation Commissioner.

Contrary to some rumors that organizations are playing their games at midnight and at 6 a.m., the fact is that “parks close at 11 p.m. so we can’t allow for organizations to play after closing hours and there have never been any requests for playing permits for hours before opening,” said Kathy LePrevost, the Community Recreations Manager. “It is a possibility though, but it would have to be cleared by our maintenance department before I could say for sure. But we’ve never had any requests for playing time before or after the park’s open hours.”

As part of a limited solution to this supply problem, the City is negotiating a new agreement with the school district for public use of its new facilities that will be built under the Civic Center Joint Use Project (CCJUP). The City has allotted $54 million allotted to this project for enhancing the campus of Santa Monica High School that includes its sports and cultural facilities. It includes the building of a new artificial turf football and soccer field on campus that will increase the supply of fields for public access.

“We’re very close to a final agreement between the City and the school district for the joint use of the new sports facilities on the Santa Monica High School campus,” said Karen Ginsberg, Assistant Director of Community and Culture Services.

Looming behind the project is the possibility that Sacramento may put an end to all Redevelopment Agencies, which would stall the CCJUP.

“I can’t predict what our State Government will do, but we’re of the opinion that the project is well on its way and should not be affected,” Ginsberg said.

She added that the agreement between the City and school district is progressing nicely, and that there are no issues that can’t be addressed. McKinnon agrees.

“It’s understandable that the two sides should want to make sure that all issues are dealt within the contract in a mutually acceptable way because it is a contract that will dictate the relationship of field and facility use for the next 30 years,” McKinnon said.

Everything seems to be moving forward, and the addition of the fields in the CCJUP will do much to alleviate the shortage for adult soccer fields. They expect the fields to be available no later than the fall of 2012.