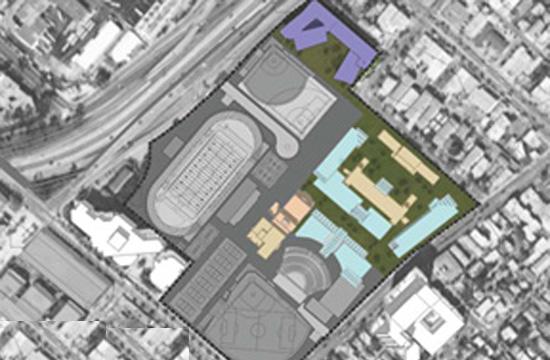 The school district has been working on plans to update the facilities at Santa Monica High School (SaMoHi) for quite some time. At a workshop on July 27 the school board unanimously approved the build-out space program for the campus’ athletic, physical education, and outdoor performance facilities.

School officials and a Parent Teacher Student Association (PTSA) representative emphasized the need to update the campus because the current facilities are either out of date, don’t meet the standards for modern day sports competition, are in a deteriorated condition, or lack support facilities. These criteria were then used to set nine priorities for the build-out.

Top priority was given to three multipurpose fields with a soccer field overlaid on each. First a football stadium would be built and then a baseball field and lastly a softball field. Next a blue gym for competition would be constructed and then a practice gold gym would be built. Attention would then turn to building a new pool. The next priority would be to build new out door basketball courts and then new outdoor tennis courts. The last two priorities would be to improve the Greek Theatre amenities and increase campus parking.

The total estimated cost for the entire build-out space program in 2011 dollars was $360 million. Board members expressed concerns prior to their vote about what would happen if there weren’t enough funding available to complete all the phases of the program. PTSA representative Elizabeth Gelfand Stearns assured the board that it is a given that “each phase leaves the campus whole even if there is no more money for other phases.”

Board member Ralph Mechur pointed out the district may need to put another facilities bond measure on the ballot next year to help raise funds for the program.

Approval of the space programming was necessary because it is required for an Environmental Impact Report (EIR) to be done. An EIR is required by the state for all future projects that may impact the environment because they have increased size, a potential traffic impact or both.

Officials also stressed the updated facilities would not only be used by SaMoHi students but also would be available for use by the community.

Catherine Baxter, SaMoHi’s dean of students told the board “what’s visionary about this plan is whatever money we get next we know what we want to do with it.”

Only five board members were present at the workshop. Board members Lori Lieberman and Nimish Patel were absent.