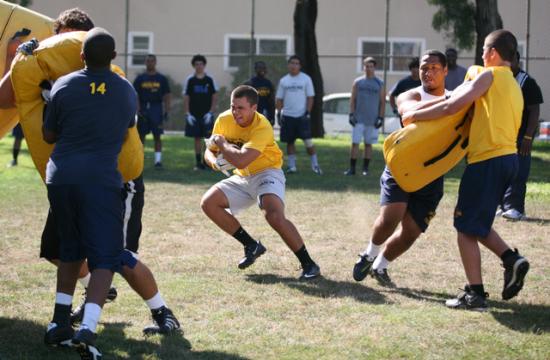 A good portion of high school football coaches every year will say they don’t have enough depth. If an upperclassman starter goes down with an injury, a season can be lost. Surprisingly, Santa Monica High School (SaMoHi) football coach Travis Clark said while health is always a concern, his 2011 Vikings are very fortunate.

“I don’t think we’ve had better depth since I’ve been here,” Clark said, entering his third season as head coach. “This is our deepest and most talented team since I’ve been on campus.”

“I showed up here a couple years ago, when I walked on campus, we had a few sophomores that we had to play on varsity because our talent level was a little down,” Clark said. “Those guys are seniors now, and they’re all about 20 pounds heavier, they’re about 150 pounds stronger and they’re hungry. They’ve taken their lumps when they were pups.

The only inexperience is in the trenches as the lines were senior-led last year. But talent could help that, and having an anchor like 6-7 left tackle and defensive end Chad Wheeler, the No. 74-ranked tackle in the country according to Scout.com. Clark said there are also a lot of bodies to choose from to put on the line because of their depth.

Seniors Christian Salem at quarterback and running back Kori Garcia hope the line holds up. Salem has thrown only 13 passes in his varsity career (1 TD, no INT), but Garcia can help him out, looking to improve upon his 1026 yards from scrimmage and ten touchdowns from a year ago.

And more good news for Salem from Coach Clark is he’ll have some speedy receivers, which will be needed as the Vikings look to replace Kris Comas. Comas’ stats speak for themselves: 50 catches, 1001 receiving yards and 17 touchdowns and had two, four-touchdown games in 2010.

Defensively, the Vikings must replace Justin Coker’s 111 total tackles and 4.5 sacks. Senior outside linebacker Chris Collins returns with his 2010 team-leading 10 sacks and four fumble recoveries while recording 84 total tackles, good for second on the team. Seniors Wheeler and Donovan Citrowski will look to improve on their numbers to help the team. Wheeler had five sacks and Citrowski had 68 total tackles.

Clark said this team wants to get the season started.

“There’s a lot of excitement in the community,” Clark said. “It’s exciting to have a guy like myself, an alum, here with passion. Obviously, everybody knows I bleed blue and gold, and I’m excited about being the coach. I’m very excited and enthusiastic about this 2011-2012 season.”