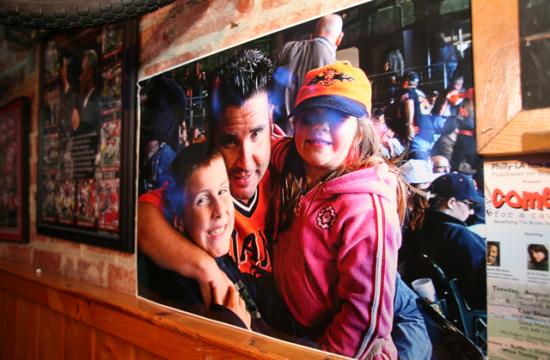 The Philly Phanatic sits, perched on a shelf overlooking the bar at The Shack on 25th Street and Wilshire Boulevard. In a corner of the bar there’s a signed jersey of former Eagles quarterback Donovan McNabb, whose John Hancock is also on a football in a display case in the opposite corner and on an Eagles banner with other Philadelphia stars from the 2004 Super Bowl berth. Two Philadelphia Phillies banners hang in the center of the bar, beaming proudly that Philadelphia won the 2008 World Series. A neon light shines for the 76ers close to the ceiling of the place.

On Aug. 9, though, one poster stuck out like a sore thumb, and nobody minded. It was an enlarged photo of a man in a San Francisco Giants jersey with his arm around his two kids. This night was for him. Phillies fans came in to watch their team face the Dodgers and to support Bryan Stow.

“Hot dogs, apple pie, baseball,” said The Shack’s proprietor and owner Patrick Good. “It’s what it should be. It’s what America is. Take care of your brother.”

On March 31, Stow was jumped by at least two Dodger fans and beaten into a coma. His recovery will take time and courage. But what the family has seen gives them hope.

“We were at the hospital (recently) with him, (his sister) Bonnie told him that she was going to leave and she wanted a kiss,” said Stow’s mother Ann, “so he turned his head and he puckered up and he gave her a kiss good-bye and then he turned his head back.”

Ann, Bonnie, and Bryan’s other sister Erin sat at the big table against the wall with friends and family for the Comedy for a Cause show with comedians Matt Iseman, Ray Grady, Erin Foley, Dwayne Perkins, and Last Comic Standing winner Alonzo Bodden. The money from admission and from the silent auction went to the Bryan Stow Fund.

Co-organizers of the event, Axel and Jon Burk, had been planning for two months.

“This was something that really affected us,” Burk said, “And as fans of teams that have a lot of passionate fans, this really, really resonated with us and really, really bothered us.”

The two called on their rabid Philly fans for help, and Philly packed the place.

“It means a lot that we don’t know these people, they don’t know Bryan, but they still came out to support him,” said Bryan’s sister Bonnie. “They put on this fundraiser to support him and they don’t even know him. People have come up to us all night, and it’s very touching.”

Good said the feeling was mutual.

“I get goose bumps. I was out there, talking to the family and seriously got overwhelmed,” Good said. “Their appreciation of this and my appreciation of all the Philly people – these people relentlessly went out and got a bunch of stuff for the silent auction and I’ve never seen that many things in a silent auction. It’s just phenomenal.”

When the night got underway, the comedians took over. Mouths that were filled with game food and beer earlier in the night were now smiling and laughing as Iseman introduced the other comedians. Up against the wall at the big table, the Stow family was laughing, too.

Ray Grady took the stage after Iseman. He told the crowded bar he had never been to a baseball game despite being from Chicago, which was received by a collective gasp from the Philly fans. Grady ended his routine with a toast.

“What’s his (Bryan’s) drink? What did he drink?” Grady asked the family. “Newcastle? Can I get a Newcastle? I’m going to drink what he would be drinking. I ain’t never had it, but I’m going to do it because that’s what (everyone) came here for. B, I’m drinking a Newcastle for you, baby. Say hi to the kids. We should all drink Newcastles for Bryan Stow.”

Grady spun his index finger to signal a round. The server hoisted a bottle of Newcastle and brought it to the stage to Grady. Grady took it, and his nerves of uncertainty about how the Newcastle might taste were drowned immediately with a swig. Grady’s voice went low.

As Grady exited the stage, he lifted the bottle of remaining Newcastle.

“Bryan Stow, we’re going to call this the Bryan Stow drink right here.” Grady looked back at the poster on the wall of Bryan and his kids and extended the bottle for cheers. “Salud, man. Salud. Get better.”