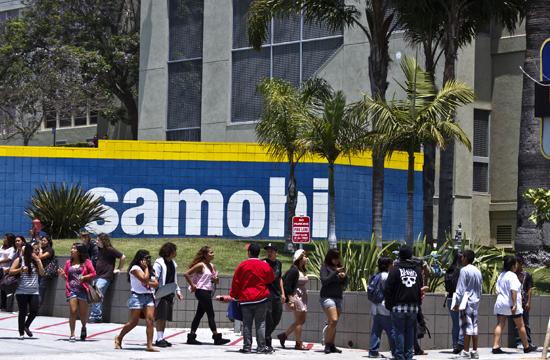 On June 21, SMPD began investigating a hate crime regarding a May 4 incident in which a black wrestler found a brown wrestling dummy suspended by a rope around its neck. Shortly afterward, the wrestler was also strapped to his locker by his teammates with a chain from a belt loop on his pants. His teammates also allegedly made racial remarks, which included “slave for sale.” The actions taken by school district officials who dealt with this incident are also being investigated by the Los Angeles County Sheriff’s Department, instead of the local police department, to avoid any perceived conflicts of interest, because of close relationship between the district and the City of Santa Monica.

Barry Snell, the vice president of the PTA’s Committee for Community Concerns explained that the council invited 42 people to participate in the meeting with the hope that they will want to become part of a collaborative steering committee. The goal of this committee will be to develop an action plan and articulate desired outcomes so that changes can be implemented in the school district so that racial incidents such as the alleged hate crime can be avoided in the future.

“I thought it was great that so many people turned up for the meeting,” said Daryl Goode from the national association for the advancement of colored people. “The goal is not a band-aid to fix one incident but a vehicle to promote understanding and progress that will involve curriculum changes and training.”

Snell described some of the concepts discussed at the meeting: one was the desire to build an asset map so people in the community would be able to know what resources are available to help them when discussing and dealing with racial issues. Another goal is to have members of the steering committee be trained based on the action plan. They then would go out into the community and assist with the programs to address race and multiculturalism developed by the school district and the City. Lastly, there should be professional development in the school district for teachers and administrators on race and culture.

“The process is going to take awhile,” said Goode. “It speaks well for the district and the community to make a safe environment for all students.”

Participants also reportedly discussed the underlying conditions that effect race relations in the community. These conditions included economics, a lack of understanding of individual cultures, a lack of respect for each person’s position, and a historical and perpetual separation of haves and have-nots. Furthermore, community members pointed to a difference of north versus south Santa Monica, with a perceived attitude that those of color are not welcome on the north side. In addition, there was also discussed the lowering of expectations at SaMoHi for black males so that the administration does not try to improve their performance. Lastly, some in attendance expressed concern that the school district hasn’t created a feeling of a safe space for those of different economic backgrounds, who are ethnically different.

“We can move forward regardless of the results of the investigations,” stressed Maurice Maxwell, the president of the black parent, student, and staff support group. “The main concern is trying to avoid this from happening again.”

Maxwell liked the fact that people were able to get things off their chest during the discussion and that student input, which was very valuable, was also included.

The group has scheduled another meeting on Aug. 22.