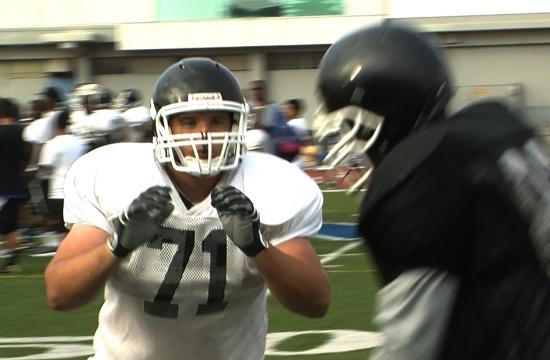 Santa Monica College (SMC) line coach Dave Banuelos still remembers the day when a Russian kid with a dream and a big smile turned up to watch one his training sessions. He was a 6 foot 5 inch, 16-year-old who continued to intently watch the Corsairs practice in the summer. Then, after one day participating in some footwork drills…

“He said he was going to come back,” Banuelos said. “So two years later he came back.”

His name was Alexandru Cehchir, originally from Moldova, Russia. He wanted more football after he got a taste playing for a European club team. When he moved to America he knew he wanted to play professional football.

Now 300 pounds, Cehchir is the leader of an already experienced offensive line, according to SMC head coach Gifford Lindheim.

“Cheech,” as his teammates call him, is lining up at left tackle, smiling at the defense who face up against him.

“He is a force,” Banuelos said. “Last year, we moved him around a little bit. We were trying to put the best five on the field; he played some right (tackle), he played some left (tackle). This year, he is anchoring at the left tackle and he’s not coming out.”

In only two years, Cehchir has picked up the game of football, from the Corsairs’ system and lineman footwork to how to keep the quarterback safe. The only thing he is still worried about is speaking English.

“He was just a fresh canvas last year,” Lindheim said. “From the first time I saw him until now, his rate of development is just incredible. Because he didn’t grow up with the sport, he’s just soaked it all in and he’s not ruined by any of the bad habits players can get into growing up.”

His defensive teammates know they have to get through him if they want to make plays. During a recent practice, a defensive end called out, “Hey, Cheech, I want you, man,” during a one-on-one pass-blocking drill. Cehchir just smiled. No luck for the defender this time. But he knows when he does beat Cheech, nobody will be able to stop him.

The problem for that teammate is the only thing Cehchir wants to do is improve, too.

“It was pretty tough (to learn the game),” Cehchir said. “It was all new, but the coaches helped me. I stayed after practice. Everyone was nice and showed what to do and I picked it up really fast. I always want to learn more. I always want to get new experience.”

Banuelos said he has coached four All-Americans and many All-Conference linemen at Div. 1 programs, and he said Cheech is “as good or better” than any of the linemen he has coached.

“I’ve had guys with more raw talent, but they don’t have his will to go get it done, and that’s why they didn’t play in the NFL. This guy has the ability and, I believe, has the will to make himself that good… If he can stay injury-free (and) develop as a player more and understand the game even more he’s got a definite shot because you don’t have guys that big run that fast all the time. It doesn’t happen that often.”

Banuelos is not the only one who believes Cheech can achieve his dream. Cehchir has received two scholarship offers from the Pac-12’s Utah Utes, who have been to eight consecutive bowl games and have won two BCS bowl games in that time, and the SEC’s Arkansas Razorbacks, who reached the BCS Sugar Bowl last season. Lindheim said Cehchir would definitely see more offers before the end of the season.

Cehchir said it was an honor to receive offers from those programs. The only thing he wanted was to do his job well, and with BCS colleges and SMC coaches confirming that, all Cheech can do is smile.