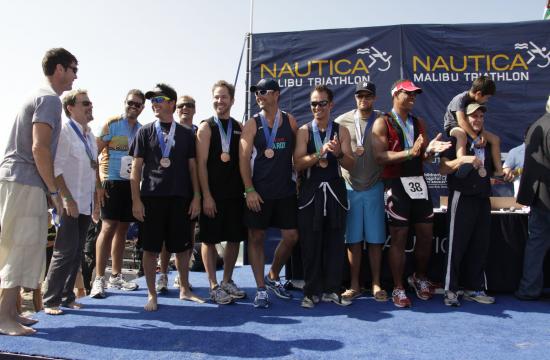 The 25th Annual Nautica Malibu Triathlon was won today by Craig Pansing as the overall victor of the triathlon, finishing the half-mile swim, 18-mile bicycle ride and four mile run in 1:23:41. Bridget Rosolanka was named the winner of the female division with a time of 1:50:42.

In addition to the abundance of spectators, stars came out to support and compete in the Nautica Malibu Triathlon.

Team Herbalife won the Classic Non-Celebrity Co-Ed Relay Division. Other teams who participated include “The Office” team in addition to teams “The Today Show,” “KTLA,” “Private Practice,” and “The Bold and the Beautiful.”

Funds raised from the event went to the Children’s Hospital Los Angeles’ Pediatric Cancer Research Program which is dedicated to curing and preventing childhood cancers. The program provides groundbreaking treatments and therapies for children with some of the most serious and life-threatening forms of cancers.

In addition to the main race portion of the Nautica Malibu Triathlon family and friends were also able to enjoy games in the Fun Zone or watch their favorite little competitors take on the Nautica Kids Run and Tot Trot.

Additional finish times for competitors are available by request or by visiting the official website at www.nauticamalibutri.com.