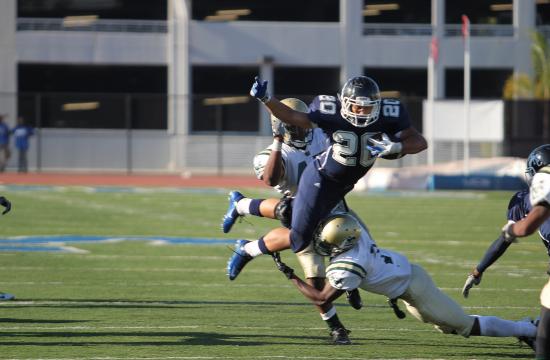 The victory capped a comeback after the Corsairs were down 22-7 late in the first half. But SMC wide receiver Kris Comas nabbed a 34-yard touchdown right before halftime to alter the mood of the game.

“It’s a tribute to our players and our coaching staff that we’re able to end up on top in these tight games,” said Corsair Head Coach Gifford Lindheim.

After giving up 22 points, SMC’s defense played a factor in the game as they gave up zero second-half points.

“It was a tough one,” said Corsair defensive end Jonathan Barkley. “(LAVC) came out and ran the ball right down the middle and we had to get in there and play a grown man’s game to stop it, but in the end we came out with the ‘W.’”

Linebacker David Mayo had nine tackles and defensive lineman Karl Buchanan had six, but Barkley got the pass deflection on fourth down to stall LAVC’s final offensive drive.

“It was a big blur of beating,” said Barkley. “The last play I saw them rolling out and the one thing I remember is that I can’t let them outside. I saw them pull up and I said, ‘You know what? Let’s get both hands up,’ and I came up and felt the ball.”

SMC’s offense came out sluggish in the first half but came through in the end. A mixture of the run and pass kept the ball moving forward for SMC, especially during the Corsairs final drive to run out the clock.

“That’s a drive that defines you,” Lindheim said. “Getting first downs and finishing the game. Pip (Daniel Pipkin) did a great job (at running back) and I couldn’t be happier for him and the offensive line. Pip does everything you are supposed to do, on the field and off the field, so I was happy he was able to get those first downs for us.”

LAVC effectively contained SMC’s offense until the fourth quarter. The Monarchs only allowed 308 yards of total offense and Corsair quarterback Alfonso Medina only threw for 175 yards. But LAVC sputtered offensively for only 231 yards and also had two costly fumbles.

“They did their homework and knew where to be on certain plays so it made it a little tougher,” said Medina who was already thinking of how to beat Glendale in SMC’s next conference game. “If Glendale plays as well as Valley did, we (will) have to practice and get our timing right.”

SMC travels to Glendale Community College next Saturday for a 7 p.m. kickoff.