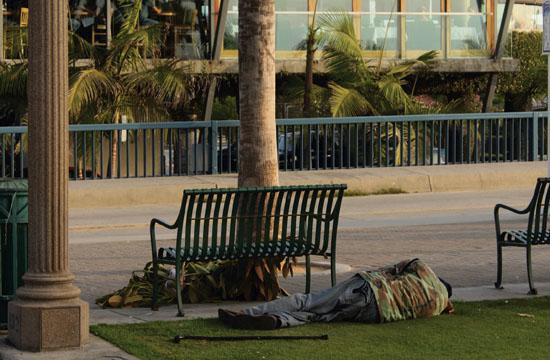 Those with homes are not the only ones dealing with cuts. Despite a drop in homelessness in Santa Monica by more than 19 percent since 2009, those without a structural abode will not be receiving much assistance from City Hall, according to a presentation of the Santa Monica Homeless Plan at Tuesday night’s council meeting.

The drop in homelessness within the city has not necessarily translated into a reduction of services provided to the homeless, Human Service Administrator Setareh Yavari told council members.

Still a key issue for Santa Monica’s residents and officials alike, Yavari pointed out homelessness was third on the list of priority level concerns in a recent survey, behind economy and traffic.

Though residents apparently do not view homelessness as concern number one, services provided to the homeless by the city and private entities remain in demand to the roughly 7,551 individuals who at some point during an entire year had a contact with one of the City-funded homeless agencies – which means they may have been in Santa Monica for only one day.

Complicating the issue: not all of the homeless are originally from Santa Monica. About 1,250 homeless are those who were once Santa Monica residents, but now take to local streets for shelter. Labeled by City Hall as a priority population, a vast majority of city services are provided to them.

Of the local priority population, the city placed about 137 into permanent housing, with another 165 receiving emergency or transitional housing, according to the city.

Still, a vast majority of homeless in Santa Monica rooted from another city or state. With those also receiving services – such as emergency medical care, personal rehabilitation, and housing relocation assistance – by both the city and private groups, the Homeless Action plan made clear homelessness in Santa Monica is not just a local issue, but a regional one.

According to Yavari, various city agencies, such as the police and fire departments, are hailed to attend to the homeless for a variety of reasons, including, as cited by one example, public drunkenness. Situations such as these may cost the city tens of thousands of dollars per person.

Weighing against the issue is an increasing strain of related services provided to the homeless. Once such strained service is housing. Santa Monica relies on a “Housing First” program to transition the homeless into some sort of permanent residence.

However, such a program requires certain deliverables that are becoming more and more difficult to come by.

“The City’s focus on a Housing First model means that clients now are quickly placed in permanent housing and provided services to keep them housed indefinitely. Agencies must continue to support those clients that they have placed in housing during past years while meeting the City’s expectation that they continue to identify and house new clients annually,” a staff report to council members stated.

“Without new resources, agencies will soon reach their capacity to serve clients, which will either lead to no new clients being housed or a need to divert services away from those in permanent housing; both of these scenarios could deter or turn back local progress in reducing street homelessness in Santa Monica.”

Looking forward, the “Action Plan to Address Homelessness” will tackle a variety of issues while calling for several deliverables, including greater collaboration with federal, regional, public, and private agencies to develop new resources combating homelessness.

Among the chief goals of the action plan to address homelessness in Santa Monica through the 2013-14 Fiscal Year include: increased leadership, collaboration, and civic engagement; increased access to stable and affordable housing; greater economic security; improved health and stability; and, revamping responses to the homeless, such as improved housing placements and coordinated emergency services.

Staff will continue to monitor the Homelessness Action Plan and provide the council with regular updates.