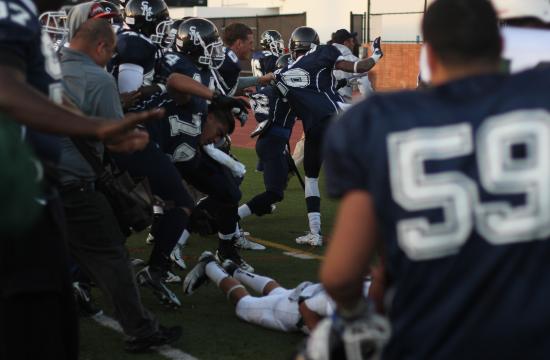 The East LA Huskies took the American Bowl Championship with a 42-28 win over the SMC Corsairs on Saturday, but the words exchanged throughout the game led to an all-out brawl after the handshake line.

According to testimonies and this reporter’s eyewitness account, a fight between the two teams started after shoving occurred while the teams were in the line.

The coaches were unsuccessful in breaking up the fight, so police got in the middle, armed with batons and Mace, and after about five minutes, the teams were separated to their respective locker rooms.

Police locked down the Corsair locker room and held the SMC players’ families and friends near the gymnasium until the players and coaches and fans from East LA left the Santa Monica College campus. East Los Angeles players took off their jerseys before leaving on the bus so as not to be identified by irate Corsair players after the game.

“When they (SMC) beat us, they danced on our field,” said Huskies’ coach Lynn Cain after the game. “But we turned around and shook hands. No one threw a punch. Why now?”

Once it was safe for all involved, the players and families were allowed to leave.

A planned awards ceremony after the bowl game presenting the CCCAA trophy to the winning team was canceled due to safety reasons.

According to police and Project Manager of Athletics Joe Cascio, nobody was injured in the scuffle.

Cascio said, “It was an unfortunate incident and a very unfortunate way to end what was otherwise a great season.”

“Emotions were high on both sides. Both teams have a lot to be proud of regarding Championship seasons. The focus should be on that, and solely that,” Lindheim said.

By rule, the referees of this game will submit a report to the American Pacific Conference about what transpired.

The conference will contact the schools if any penalties will be issued.