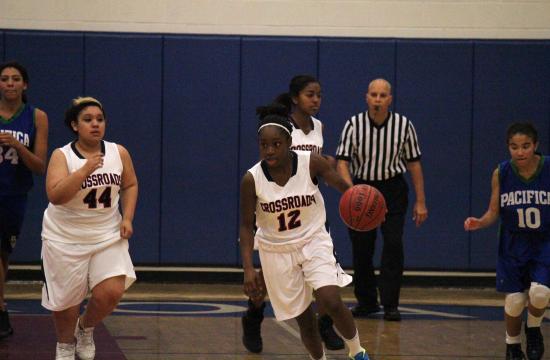 The Pacifica Christian Sea Wolves put up a strong fight in the first quarter against the Crossroads Roadrunners and were only down 11-8 before the second quarter began.

But Crossroads forced turnovers and missed shots and held Pacifica to three points in the second and third quarter combined to turn the game into a 51-19 blowout.

The Crossroads freshmen girls scored the majority of the points with shooting guard Kayla Mitchell leading the Roadrunners with 21 points, followed by forward Hannah Offer who had eleven, and point guard Kiara Long who scored eight.

“Essentially our offense is going to come from defense really, and to focus on defense first,” said Crossroads coach Christine Smith. “So protecting the basket (is how) we don’t allow people to penetrate. We stop the drives and play the lanes.”

Smith has a team that consists of seven freshmen after losing all of her varsity seniors last year, but she said the talent shows potential to upset teams in league play starting in January.

“They are doing well,” said Smith. “They have a lot of energy and work really hard. But they are actually going to do really well, especially, since we have a lot of years to grow together.”