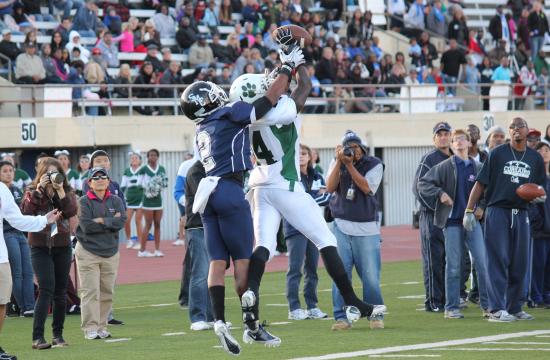 The East Los Angeles Huskies only gave up one second half touchdown while scoring 21 of their own in the third quarter to take down the SMC Corsairs 42-28 in the American Bowl on Saturday. After the game, emotions got the better of both teams a full-blown fight broke out between the two teams. More information on the brawl can be found HERE.

The win gave the Huskies payback for their two-overtime loss to the Corsairs at home on Sept. 10.

“Santa Monica College played a good game,” said Husky Head Coach Lyn Cain whose team just won the Mountain Conference with a record of 5-0. “I can understand the emotions. They were pretty jacked up, pretty excited when they played us the first time and they know what it’s like to beat us on our own home field.”

East Los Angeles running back Preston Oliver ran for 147 yards and two touchdowns for the Huskies while quarterback Aaron Cantu threw for 330 yards and another score.

But the third quarter was where the stats didn’t matter. After Oliver scored his second touchdown of the game to put the Huskies up 28-21 in the third quarter, their defense forced a three-and-out. Corsair punter Jose Esquiviel’s punt was blocked and returned to the SMC 13. Cantu used a quarterback sneak to cross the plane to provide a two-touchdown cushion at 35-21.

And on the first play of the ensuing SMC possession, the hole turned into a grave. Alfonso Medina’s arm was swatted and the fumble was returned for a touchdown to make the score 42-21. The Corsairs couldn’t make up the difference.

“We didn’t capitalize on opportunities we had throughout the game. That was disappointing,” said SMC coach Gifford Lindheim. “There were several times where I thought we were getting ready to take off and play great, but it never materialized.”

In the losing effort, “Myghty” Myles Johnson had 194 yards from scrimmage and quarterback Alfonso Medina threw for 248 yards and four touchdowns. But Medina’s four interceptions, including two in the second half, hurt the Corsairs’ chances to comeback.

“My hats off to the East LA squad. They’re a good football team,” Lindheim said. “It’s very difficult to beat a team twice in a season. I was sorry to send the Sophomores out with a loss.” “With that being said, we’re the American Pacific Conference Champions and have a tremendous amount to be proud of. I’m pleased with the direction of the program, and am excited to get back to work.”